Lars and The Real Girl DVD, from Sidney Kimmel Entertainment is rated PG-13.

The DVD version features some alternate scenes and one short deleted scene: “Bathtub.” Also, behind the scenes: “The Real Story of Lars And The Real Girl,”

which shows the crew talking about the actors. Plus, there is a featurette: “A Real Leading Lady,” and trailers, Forced Trailers (3) Trailer Farm (2).

In Canada, some people reported disappointment, because there were no extras on their copy of the DVD.

A kind of Invasion of The Silicone Body Snatchers, Craig Gillespie’s Lars And The Real Girl is about one loony guy and his entire small town falling in PG love with a certainly not politically correct but irrefutably anatomically correct, well, sex doll. For some strange, highly inexplicable reason, this deeply delusional romantic comedy casts its magical spell over the audience too, and not just this kooky Midwestern community.

Ryan Gosling (Fracture, Half Nelson, The Believer), a young actor who has easily earned bragging rights to being a national treasure capable of morphing into just about any character, plays Lars, a profoundly withdrawn office worker who shuns any social contact with others, whether physical or verbal. Lars might be characterized as an adult orphan, a guy who has never come to terms with the death of his mother while giving birth to him, and the more recent death of his equally withdrawn widower dad. Lars’ older brother Gus (Paul Schneider) has moved into the family home with his pregnant wife Karin (Emily Mortimer), and they have to practically kidnap Lars from the garage where he’s withdrawn to live alone, when insisting he come over for dinner occasionally. 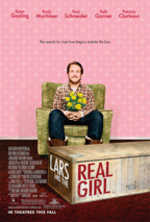 For some reason, Lars is spooked by the presence of a pregnant woman in their family, as it conjures the trauma of his own tragic birth. When a lewd co-worker shares online ordering information with his romantically deprived workspace buddy about designer love dolls for sale, a visitor to this glum hermit soon arrives by UPS in a huge carton. Lars introduces the boxed babe to Gus and Karin as Bianca, a Brazilian-Danish paraplegic non-English speaking missionary that he states he met on the Internet.

Not wanting to offend the psychologically fragile Lars, they humor and feed – literally – his make-believe sweetheart, and the entire good natured community follows suit. Though that naughty mom-to-be does take a shocker of a sneak peek between Bianca’s thighs one day to check out the presence of any plumbing. Friends and relatives are soon getting emotionally attached to Bianca and borrowing her, so to speak, for play dates and other functions. Bianca is in fact so universally loved, that she’s elected to the school board.

Now while Lars And The Real Girl is seductive enough to reel the audience in, there are certain lingering questions that even this enchanting tall tale can’t put to rest. For example, where does such a town exist without a single unkind person in sight, and when you’re feeling clinically depressed all the women come by with their knitting and casseroles? I’m sure we’d all pack our bags to move there in a flash. Also, does Lars ever, you know, actually have intimate relations with his inanimate object of desire? The director’s not saying, and Lars is fanatically tight lipped, so it’s pretty much up to the audience to get into their own Lars frame of mind, and just use their overactive imaginations.