This a repetitive, dull, saccharine-sweet story that plods from one meaningless scene to the next and if there were any funny lines, the 500 people I watched this with didn’t get them.

Larry Crowne (Tom Hanks) loves his job at the local supermarket but is ‘let go’ due to the fact that he doesn’t have a degree. He decides to go back to school and enrolls at the local college where he is befriended by Talia (Gugu Mbatha-Raw) and taught by Mercedes Tainot (Julia Roberts).

When this film finally gets to the end, and I mean the very end, it becomes clear that it’s supposed to be a love story, but prior to this Larry and Mercedes have had just one scene on their own, with no flirtatious moments in the build-up or even a hint that their getting together could spell romance. Instead, Larry spends time with Talia, with his neighbor, riding around on his new scooter, having his hair cut, going to the bank and, worst of all, taking classes in public speaking and economics, the latter being so crashingly boring that this film could be an advertisement to stop people going back to school. 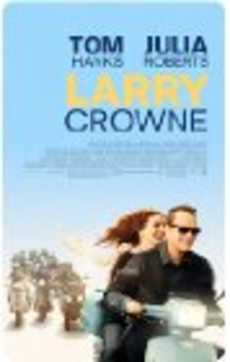 None of the interaction between the characters does more than skirt on the surface and it’s obvious Talia, 30 years Larry’s junior, is there as the text book mentor all screenplay heroes are supposed to have. Their already painfully contrived relationship becomes plain silly when her boyfriend gets jealous of Larry and everything becomes absurd when Mercedes does the same, with her barbed comments coming over as simply infantile.

All the characters are endlessly sweet and kind and helpful, and the only sign of a flaw is from Mercedes, who starts on the margaritas a little early in the evening, but this could be because she’s getting ready to appear in one of the cheesiest scenes in cinema history. “I’m a tough grader, but I gave you an A+ because,” she gushes, “you’re a great student,” to which Larry replies, “And you’re a great teacher.” It really is enough to get you reaching for the sick bag.

Directed and co-written by Tom Hanks.