An equal parts enchanting and baffling war movie taking place more within the fanciful recesses of the mind than on the battlefield, Serge Bozon’s La France may be about WWI, but its allegorical impact touches in many ways on all wars. Evolving as a series of surreal dreamscapes where military conflict is more a notion than a reality, the film builds its dramatic impact through a hypnotic fusion of psychological turmoil and existential rapture, playing out across a vast, pristine remote French countryside.

Sylvie Testud is Camille, a rural newlywed whose soldier husband has written her a puzzling letter from the WWI front indicating that he’s in a grave situation and no longer wants to correspond with her. The distraught young woman attempts to leave her village to find him, but is turned back by the local authorities who insist it’s too dangerous out in the world right now for a female. 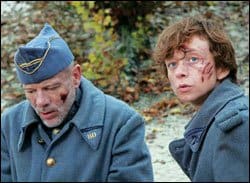 So the determined and desperate Camille cuts off her hair and disguises herself as a male, in order to embark undetected on her mission to find her mate. As she journeys on foot through the rugged forest terrain, she encounters a peculiar regiment wandering through the countryside, who have seemingly lost their way and not in a particular hurry to rejoin the battle. Camille persists in following them, even though they make numerous attempts to get rid of him/her. Occasionally they stop to break out in song, with strange homemade instruments that seem to appear out of nowhere. The music centers around the ongoing adventures of a blind female. They also periodically verbalize longings to locate the elusive Atlantis.

La France has the odd but potent effect of inspiring viewer exasperation at times, yet revealing an ethereal aspect of the war experience that in its bleakness stirs the mind with far more elusive questions than answers. A tantalizing, visually lyrical elixir for those enamored of mystifying brain teasers.