While there’s an exchange of bodily fluids galore in the outrageously hilarious Kenny, you’re not apt to come across a single sex scene. Equally amazing, is that unless you’re tipped off to the fact that this extreme Aussie comedy about an ill-fated portable potty delivery and waste management worker is not an actual documentary, you’re guaranteed not to have a clue. That particular bit of mad genius can be credited to the daring sibling Jacobson duo who hatched this brilliantly weird movie, Clayton as writer/director and Shane, the co-writer and star.

This major award winner mockumentary and box office hit Down Under, gets its reality-charged inspired energy from having been subversively staged at actual events, including the Australian International Air Show, the Melbourne Cup, and the International Pumper and Cleaner Expo in Nashville. Kenny (Shane Jacobsen) is a gabby and oddly cheerful itinerant working stiff for the Splashdown company in Melbourne, a line of ‘elimination’ work that is guaranteed never to go out of business. Kenny approaches his chosen field installing and cleaning portable toilets for the often rude and contemptuous masses ridding themselves of bodily wastes therein, with all the optimism and pride he can muster, under the circumstances. 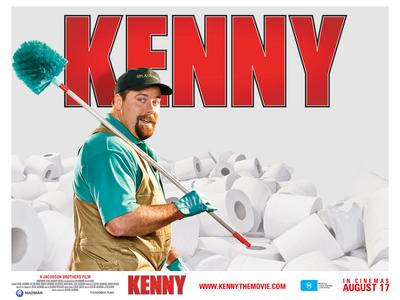 Kenny’s private life isn’t much of an improvement. In this strictly family affair production, Shane’s real life father Ronald plays his cantankerous, denigrating dad, and Clayton does the more successful, dismissive sibling thing. Meanwhile, Kenny’s hostile ex-wife (no relation) plays malevolent hide and seek with their son (his real life offspring, Jesse) at the most inconvenient moments when Dad happens to be into serious poop duty at work.

Kenny will inform you about more than you’ve ever known, or wanted to know, about the science, history and philosophy of human excrement. And this dedicated guy even investigates the items on the buffet menu of an event that he’s well, catering in his own way. Because certain ingredients like curry will necessitate an extra supply on hand of toilet paper, who knew.

There’s even the possibility of a little unscheduled romance for this deeply entrenched workaholic, who is so into his call of duty, that he can’t even tell when a woman is hitting on him. But a flirtatious flight attendant on the way over to Nashville does catch his eye when the toilet backs up in mid-air, and Kenny’s got just the cure.

Despite all the wild and icky antics that ensue, Kenny is in no way your typical gross-out comedy. Mainly because the spotlight is less on crude easy laughs, than a genuine feel for the tragic-comic, Chaplinesque proletarian plight of a worker just trying to find some dignity for himself in an unfeeling world. Or, as the film’s opener encapsulates and says it all, ‘None are less visible than those we decide not to see.’