This is a teen movie and, while it’s possible that that specific age group might find it mildly entertaining, it’s really nothing more than a superficial romp with a bunch of students who imagine there’s a conspiracy as a result of taking too many illegal chemicals on a regular basis.

Smith (Thomas Dekker), who believes he is gay, is a freshman at college and is about to celebrate his nineteenth birthday. He is haunted by dreams which include some people he knows, and some he doesn’t. He spends a lot of time with his lesbian best friend Stella (Haley Bennett) and when his dreams go up a notch, it’s her he confides in. 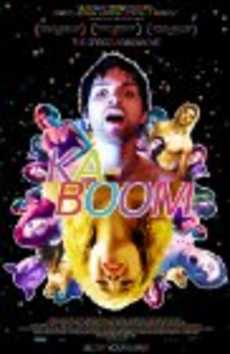 This film begins with quite a lot of humor. The tone is light, quirky and really quite entertaining, However, all this changes about thirty minutes in when it becomes dark and melodramatic, involving a storyline about Smith’s father that is too serious for what has come before. This change in tone continues for the rest of the film, hopping back and fore between fun and the dramatic, making it difficult to enjoy either.

Most of the humor is delivered by Smith’s best friend, Stella, who is unerringly sarcastic. When Smith confides in her that he has had sex with a woman, and he thinks he might not be gay, her response is scathingly sarcastic. “Just because you randomly stick it in a girl doesn’t mean anything beyond the fact that you need to monitor your drinking.” If this had been Stella’s story and she had been allowed to deliver her acerbic wit throughout, it would have been an exhilarating experience.

The producers bumph on this film claim it is a sci-fi story centered on the sexual awakening of a group of college students, but if these kids spend any more time in bed, they’ll never make it to class. As for the sci-fi element, presumably this is a reference to the characters who dress up as pigs, in which case the producers must be smoking the same stuff as the students because, where I come from, pigs can’t fly.