16 year-old Juno MacGuff (Ellen Page) is a precocious slacker who comes to regret her one-night stand with the very grateful Paulie Bleeker (Michael Cera), a social zero with not much going for him in terms of romantic prospects. For, not only does she end up pregnant, but by a classmate she thought she was just using for a fleeting gratification. 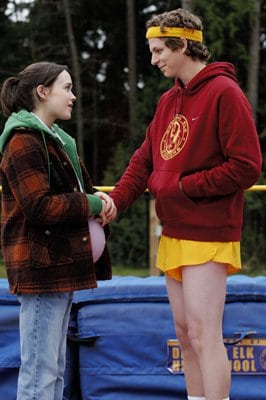 With no interest in keeping the baby, she starts turning over all of her options with the help of her best friend, Leah (Olivia Thirlby). She rejects the idea of having an abortion, but she also doesn’t want to hand over her offspring to an orphanage without knowing that the child’s ultimately going to be raised in the right environment.

Finally, she decides to run an ad in the newspaper offering the newborn for adoption, so she can personally audition the potential surrogate parents. And she eventually settles on Vanessa (Jennifer Garner) and Mark (Jason Bateman) Loring, a very happily-married couple who seem like the perfect prospects.

They’re eager to start a family, but have been totally frustrated in that endeavor by Vanessa’s infertility. Conveniently, the barren woman’s maternal urge dovetails neatly with Juno’s need to place her kid in an ideal, upscale suburban setting. 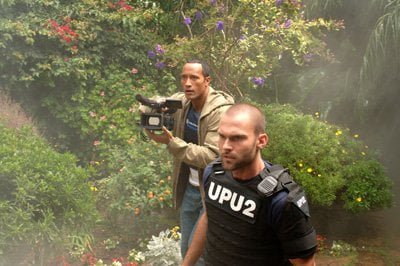 This is the novel point of departure of Juno, a quirky, coming-of-age teensploit rather reminiscent of Ghost World, another offbeat adventure revolving around a quick-witted, female smart aleck with a blase attitude. Set against the jarring candy-colored, Pee Wee Herman-style backdrops, the production has the same surreal wanderlust about it that worked so well in Garden State.

Juno was directed by Jason Reitman, whose Thank You for Smoking was the #1 pick on my Top Ten List for 2006. The film features scads of the same sort of sophisticated dialogue which marked both Ghost World and Thank You for Smoking. The difference is that, in this instance, the quip-happy script fails to differentiate much among its colorful cast of characters, and simply tends to go for the joke at all costs, forcing pithy remarks into the mouths of anyone and everyone, even if malapropos. 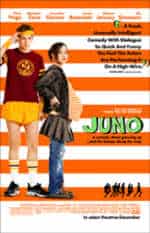 The upshot is a terminally-clever comedy that’s laced with lots of inspired sardonic humor but can’t quite convince you to take its slowly thickening plot seriously. This is unfortunate, because the production squanders its potential edginess surrounding some surprising developments, such as the sexual tension which arises between Juno and Mark, by always looking for laughs at the expense of substance.