Promoted by writer/director Guy Ritchie (Lock, Stock And Two Smoking Barrels) as a thinking man’s crime thriller, the relentlessly bloody and grating hi-decibel Revolver may best be compared to – if anything cerebral at all – a migraine headache. That is to say, if there’s any mob racket in full swing here, it’s the movie’s racket assaulting you inside your head. Jason Statham is Jake, an introspective ex-con gunning for a casino honcho (Ray Liotta) named Dorothy – I kind you not – who is setting up plans for a counterattack, when not screaming and parading around in an assortment of dainty skimpy drawers throughout the movie. At the same time, Jake is hit with the bad news that he’s possibly terminal, so the dramatic tension, such as it is, boils down to a tossup between whether Dorothy or bad genes will snuff him out first. There are also intermittent chess games between scenes of Jake’s incessant inner, dreary macho monologues, and gangsters prancing around like homicidal matadors unusually impressed with themselves. 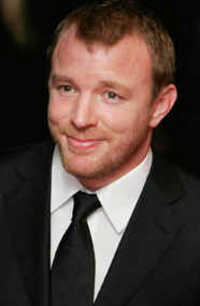 Ritchie mentioned during this interview, that Revolver has redeeming social value because it brings violence into question while maybe channeling his own rage, watta Guy. Let’s hope that Madonna didn’t drive him to it. Incidentally, as divulged in this sitdown with Guy, he’s fixated on gun love in his movies, but is in no way into shooting Madonna, so to speak. Apparently Mrs. Guy Ritchie as this director’s muse and leading lady on screen in Swept Away, surprisingly led him to back off from ever thinking about her in that particular way again.

You have quite an obsession going with gangster movies. What is it about them that turns you on?

GUY RITCHIE: I dunno, it’s just a genre that I found myself in, and it’s hard to get out of. I don’t want to stay in it forever. But Revolver isn’t really about gangsters. It’s about the human condition.

GR: Well, there are some people we reward, who are also crinimals.

GR: Yeah, and our darker mind doesn’t want us to understand its premise. That’s what this movie is about, that we are our own worst enemy. And to a degree, it is insanity. And what some people call the devil, a psychiatrist would call the ego. It’s man’s struggle with himself, and that’s what the movie is all about.

But there are people who just want to see a down and dirty ass-kicking Guy Ritchie movie.

GR: They’ll just have to wait for RocknRolla, my next movie! This one is a head case movie.

Now about that sheep controversy of yours, and those animal rights protesters….

GR: Sorry, I don’t know anything about that.

You know, the sheep you dyed on your property.

But it was just in the papers.

GR: Well, I think there can’t be a reaction. Some sheep just got vegetable dye on their wool or something, I don’t know. I don’t think it warrants a comment, actually! I don’t think about animals one way or the other.

Okay…Do you think you’ll tone down the violence in your movies, now that you’re a father?

GR: Well, to a degree. But I think this movie is about the root of violence. You know, behind the facade.

Do you let your children watch your movies?

GR: No, absolutely not! That’s why movies have ratings on them. No, my kids watch movies that are appropriate to what they should watch. So they don’t watch my movies!

Was it your intention for Jason to go through this movie with his clothes on, because his fans like to see him take them off.

GR: Yes, it was my intention. I did want to keep his shirt on him. I like him as an actor with his clothes on, more than I do with his clothes off. I think he’s a competent actor, so I wanted to…keep him fully clothed!

But there is that scene in the shower.

GR: You’re right, there is that 30 second shower scene. But I forgot it was in the movie.

Well, your camera seemed like it was really lingering on him. What does that mean?

GR: I suppose I did. Maybe because he was in this movie more.

So is this more an American or British gangster film?

GR: We ended up in the middle of the pond. It has a trans-Atlantic feel to it.

There’s a lot of chess playing going on in Revolver. So who’s the better chess player, you or Jason?

GR: I’m definitely the better chess player. But he’s a much better swimmer!

What’s your next movie RocknRolla all about?

GR: It’s about modern contemporary England, and how it’s become the new New York, to a degree. You know, all the shenanagins about private property, and property prices. Because the new villains are all in property, there’s so much money to be made there. It’s a humorous film!

What’s your iconic gangster movie, that maybe changed your life?

Can you talk about what went wrong with Swept Away?

Do you think you’ll work with Madonna again?

GR: Well, you’re always going to have those built-in complications that we had on that one.

What do you mean?

What’s going on with your philanthropic activities?

GR: Uh, that’s more my wife’s department, than it is mine. So you’ll…have to take it up with her!

And what about your new son?

GR: He’s very happy. I see him as my son, and I’m very happy with him. And so does the rest of my family.

What will you be doing for the upcoming holidays?

GR: I don’t think it’s different from anyone else’s Christmas. Other than we’re reducing the amount of presents that the kids receive. So we think it should be three presents a kid. Then they won’t go overboard, and get drunk! You know, on too many gifts.