Johnny Mad Dog is a militia commander and orders his soldiers to murder, torture and rape in the name of a vague ideology that condemns everyone who is not a member of their rebel faction. But there is one thing that separates Johnny from most other terrorists. He’s only 15 years old, his band of killers are younger still, and they were all stolen from their parents when they were too tiny to fight back. These are the child soldiers of the world. 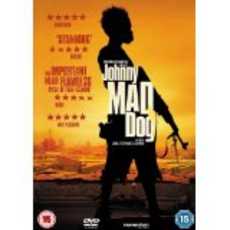 This film opens just after the assault has begun, with no establishing shot, no title and not even a line of text to tell us where in the world we are. But the truth is, it doesn’t matter. All that matters is that what we’re seeing here is terribly wrong, and throwing your audience, stone cold, into such terrible conflict makes them feel disoriented and their lack of knowledge renders them powerless, just like the people on the screen. This is storytelling at its very, very best.

As the opening scene unfolds outside on the street, inside a soldier tries on a wedding dress, never taking his eyes off his reflection as he gently pulls the sparkling white lace over his muscled torso, slips the starched veil onto his cropped head, and stands, mesmerized by the vision of his shrouded body. From then on, he no longer wears his uniform, only his gown, but his cohorts make no comment, perhaps because it’s a symbol of the dressing up game they used to play, in a different life, before they had their skin scraped and rubbed with cocaine to make them braver in the battles they were about to wage.

These children are typical of thousands who have become fearless little fighters and whose only comfort has been the steel of their gun. So even if they are saved, and they have their guns taken from them, will they be able to reclaim their brutalized lives? With their parents quite likely murdered and their country ravaged by war, will they perhaps feel the need to revisit, and find comfort from the familiar, however cold that might be?

Based on the novel by Emmanuel Dongola