This is a film about J. Edgar Hoover’s career, his relationship with his mother, his non- relationship with a male colleague, a high-profile kidnapping, his belief in forensics, his quashing of communism, his suspicion of civil rights and his penchant for keeping secret files on politicians. It is intended to be a biopic but flies around at such a pace that there is no time to get to know the man whose flaws would doubtless intrigue and becomes nothing more than a mildly interesting trudge through American history.

The wheels of the story are set in motion when Hoover (Leonardo DiCaprio) starts dictating his memoirs, taking us from 1919, when he first joins the ‘Bureau’, to the present day. It is this biased, episodic narrative that dooms J. Edgar from the start, even more so when we find out in the final sequence that our narrator has twisted the truth and told us nothing but lies. This is revealed as more of an aside than a major issue which leaves us at first confused then cheated, because we have been mere bystanders instead of fellow conspirators and the hero of the story went on his journey alone. 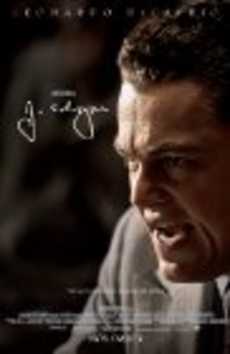 Another major problem with this film is that it relies entirely on mountains of speech-y dialogue to tell its tale. This is painful enough in itself, but there is also a voice-over that is quite relentless and, after a full hour of J. Edgar in stereo, it becomes ear numbing, particularly as DiCaprio’s accent sounds like a cross between Tony Soprano and J. R. Ewing.

This time-spanning epic is told in flashbacks, but the jumping back and fore is excessive and the storytelling has a broken feel which stops us becoming truly connected with anyone or anything. We spin from decade to decade, from young men to old, distracted even further by make-up that becomes a drama all of its own. This disconnect proves fatal when J. Edgar’s final appearance slips into sentimental -land and we again become bystanders, ill-equipped to share in the grief that is being played out on screen.

There is only one scene in the entire film that makes an emotional point, which is when Hoover’s domineering mother dies. It becomes clear her death has liberated him sexually and, before she’s grown cold, the director of the world’s most famous crime fighting-organization is prancing around dressed like a flapper. This is the first and only visual that tells us what is going on inside and it’s a welcome respite, but how the White House will feel about the legendary Mr. Hoover being outed as a trannie is a matter for another day.