Inception is a two and a half hour lecture on metaphysics, with some Groundhog Day and James Bond moments thrown in. It’s a futuristic story but no new sci-fi world has been created and the story is simply dropped into the present day, without a ray gun or lightsaber in sight. And instead of using a tardis to get around, our hero uses a white van – how passe is that?

Dom Cobb (Leonardo DiCaprio) is highly skilled in the art of extracting people’s ideas when they are asleep and he has the reputation of being the best dream thief in the business. Unfortunately, one of his forays goes wrong, and he loses everything that he loves. He is then offered redemption by taking on a job that doesn’t require him to steal but instead he has to do the reverse – he has to plant an idea in someone’s mind. It’s an unprecedented task but Dom sees it as his only hope and picks up the gauntlet. 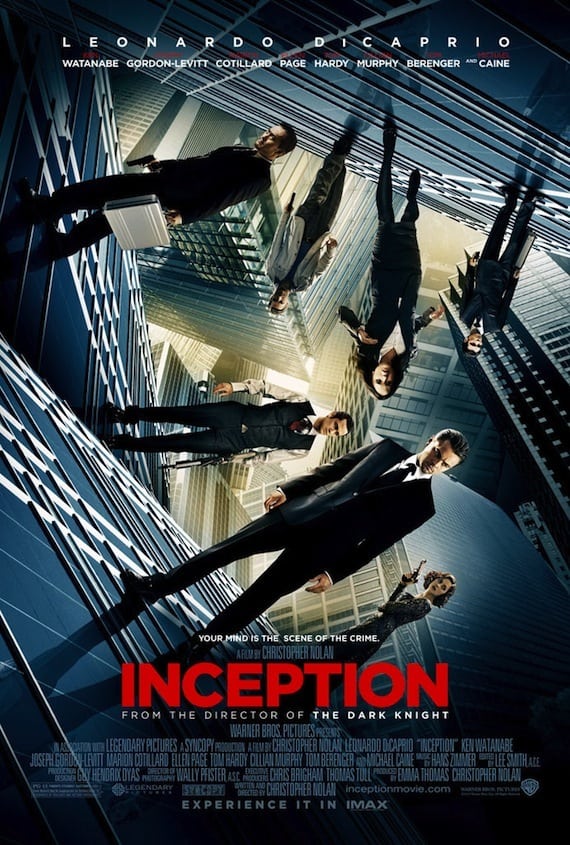 Although the concept of this film is steeped in the psychology of the sub-conscious, this fascinating subject is not only left unexplored, but is largely ignored. Instead of journeying to the depths of our invisible reality, we experience a barrage of shoot outs and explosions that feel repetitive and don’t get us anywhere. And there’s nothing very interesting about a car chase in a sci-fi film when all they do is take pot shots at each other. What happened to the front-firing rockets, indicators that swivel to become gun barrels, and the back up anti-pursuit system? (Or have I been watching too many old Bond movies?)

Disappointingly, we never learn why Dom Cobb is so gifted at stealing ideas and never share the moment when his mind connects with that of his comatose victim. The only aspect of the dream world that is discussed is the fact that we never remember the beginnings of dreams. At least, I think that’s all that is discussed. There could be a lot more but it gets lost in the endless, droning conversations that make up most of the film. Something happens, then it is explained to us in bucket-loads of dialogue why this event is bad/potentially dangerous/possibly catastrophic. It’s a bit like mailing a letter to someone who slapped you in the face the day before – why bother?

Although the story is overly complicated, it’s possible to follow, but fathoming out the enemy is another matter. It could possibly be the Energy Suppliers who are mentioned early on in the film, but it’s really terribly vague. If someone took a potshot at 007, we’d know if it was Dr No, or Odd Job, or even Goldfinger himself, and we also know that if Moneypenny gave him the keys to a white van instead of an Aston Martin, he’d toss them straight back.