This is a story steeped in realism about a beautiful Arab girl who dares to cross the ethnic line. She becomes a victim of religious politics and is never allowed to embrace Islam or her illegitimate son, who is judged by the extremists to be as guilty as his vanquished young mother. It’s a compelling tale.

Nawal Marwan (Lubna Azabal) was born in the Middle East but emigrated to Canada when her twins, Jeanne (Melissa Desormeaux Poulin) and Simon (Maxim Gaudette) were infants. When Nawal dies, she leaves her children two envelopes, one of which is to be delivered to the father they believed was dead, and the other to a brother they never knew they had. The two young adults take the little information Nawal bequeaths them and set off for their ancestral homeland to unearth the mystery of their family’s past. 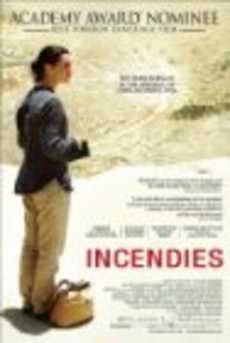 As the twins search, so Nawal’s story unfolds, and this courageous woman willingly takes us with her on her journey; she lets us see her terrified, humiliated, feisty and, above all, desperately alone. We know for sure that her heart is good, so the endless injustices she has to endure seem all the more brutal and her persecutors all the more vile. There is a prevailing air of fear, not just from Nawal, but from the people who surround her who are unable to think for themselves, ruled by the harsh doctrine that has no face, no mercy and nothing to give.

The story is told in flashbacks, with Nawal being brought in as the visual answer to the questions her children ask. This is cleverly done, but at the same time keeps taking us away from the heart of the story and it is always with great reluctance that we leave Nawal’s side. There is also an element of vagueness about Nawal’s adult political life and we have no knowledge of the moment when the apolitical collides with the activist and gives life to the militancy that exists inside.

Despite the passing of time, there are undoubtedly many Nawals out there right now, hurtling down the same tragic path as our tortured heroine and who may also have to bear a similar fate. It’s a harrowing thought but the message this film sends is one of hope, that the human spirit can endure no matter how pummeled its soul may be and, if Nawal managed to find forgiveness in amongst the shards of her tangled life, then so should we.