While blockbusters ooze testosterone and claim bragging rights to macho action heroes beating their hairy chests, way in the background is a lineup of sweet little indies with sensitive guys wearing their hearts on their sleeves instead. And feeling bad about themselves, and not ashamed to say so. Not to mention having the last word so to speak, as they run off with most of those statues, at awards time.

So move over, Iron Man and Indiana Jones. Because here comes, well, Scoot McNairy as Wilson, a moping twentysomething LA transplant from Texas who’s not out to save the world, but is simply in search of a midnight kiss, in a movie by the very same title. That’s not to say that In Search of A Midnight Kiss isn’t also the stuff of screen fantasy. But it’s closer to a fairy tale – specifically Cinderella – with hefty dollops of sweet and sour realism tossed in.

Wilson headed to LA from Texas to do drudge duty in a video store, after being dumped by his girlfriend back home. Still far from emotional recovery, he contemplates bathroom suicide daily, except that the apartment tub is too dirty. Lust is also gnawing away at his psyche, and when his roommate catches Wilson pleasuring himself in front of an image of his own live-in girlfriend, the needy guy is pressured into hooking up by his concerned roomies, with a mystery woman from the Craig’s List classifieds.

But Vivian (Sara Simmonds) turns out to be much more than Wilson bargained for, or can handle. Vivian is a fetching aspiring actress, but nearly out of control whining wacko who seems to have an aversion for the human race, and men in particular. For some unfathomable reason, she nevertheless allows Wilson to follow her around for one day, until 6pm that is, merely because he begs her to do so. 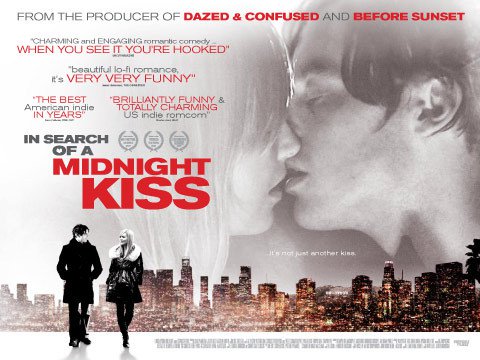 And that’s where the Cinderella part comes in. Vivian has a strange shoe fetish, at least for abandoned ones, that she photographs and collects snapshots of, all around LA. Then there’s the matter that it happens to be New Year’s Eve, and what Wilson yearns most for is that midnight kiss heralding in the next one, and hopefully a fresh start in his damaged life. But will Vivian stick around that long to heal his world, or take off before midnight and leave him with a broken heart all over again. Then there’s the matter of that proverbial pumpkin, which is the bittersweet surprise of this painfully funny, nutty and poignant romantic comedy, not necessarily tying up all those complicated loose ends.

Director Alex Holdridge has a genuine feel for character, emotion and raw human pain with In Search Of A Midnight Kiss. Some of it may be a bit on the far fetched side, as for instance why Wilson would follow around this aggravating, loony tunes bad news blind date for so long. But hey, this is a fairy tale, and one with all the rarely captured LA urban grit and nostalgic atmosphere to spare.