Philippe (Louis-Do de Lencquesaing), a charming Frenchman living in Manhattan, feels free to have his way with women, since he’s married to a bitchy wife. So, he’s currently carrying on a steamy affair with Betty (Opal Alladin), an attractive black woman who has no idea her husband Tiger is coming home from a business trip earlier than expected.

Philippe lets himself out of the couple’s townhouse just as her spouse is about to enter, leaving it to his disheveled mistress to explain exactly who the handsome stranger he just passed was. 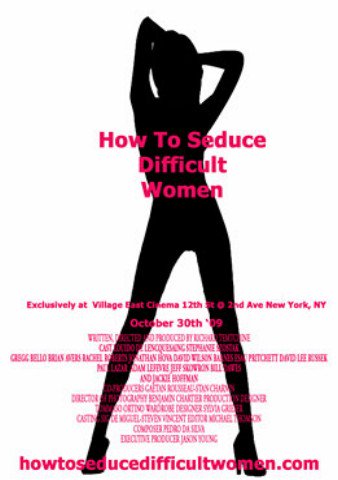 Convinced that what the world needs now is more creepy womanizers like himself, Philippe decides not only to write a how-to book delineating his modus operandi but also to teach a course on it as well. The text, the course and this movie chronicling his students’ ensuing misadventures are all entitled “How to Seduce Difficult Women,” a battle-of-the-sexes comedy which is basically a sloppily-edited, series of unfunny, disconnected sketches adding up to far less than the sum of its parts.

The movie marks the writing/directorial debut of Richard Temtchine, a cosmetologist whose prior claim to fame was having the late Grace Kelly as a client. His flick essentially revolves around the dates and fates of the ten men who enroll in Phillipe’s class, a motley crew of romantically-challenged losers.

The knuckle-dragging Neanderthal suggests that his socially-awkward pupils adopt an aggressive, cave man approach, as if females are uniformly docile and desire to be dominated. He even supplies a blow-up doll, Sabrina, for them to practice on. His advice subsequently works for them to varying degrees, however the overriding sexist theme doesn’t work for the audience, given that we’ve come a lot farther in terms of relating than merely dragging women off after conking them on the head with a club.

Memo to Richard: don’t quit that day job as a hair stylist.