This is one of those romantic comedies when you know within the first five minutes how it’s going to end. The girl in the love triangle will briefly accept and then return the expensive ring the wealthy boyfriend gives her so she can go off with the guy who is broke. Actually, it turned out to be a diamond encrusted watch, not a ring, which is the biggest surprise of the entire film.

Lisa (Reese Witherspoon) is a professional softball player and, at 31, is cut from the US team. She is casually dating Matty (Owen Wilson), a highly paid pitcher, and has had one blind date with George (Paul Rudd). Matty asks Lisa to move in with him, which she does, but she’s not happy and begins to spend time with George. (Sorry if this synopsis seems a little lame, but this is all there is to this film). 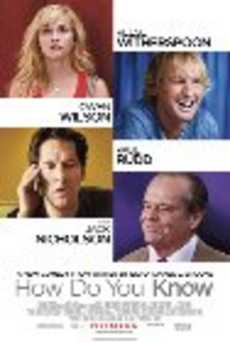 Although two of the three main characters are professional athletes, this world is never mentioned after the first few minutes and Lisa might as well have been a hairdresser who had to pack it in because of her varicose veins. She’s also not much of a role model as all she ever does is lurch from one boyfriend to the other, despite claiming that she’s not like her desperate-for-a-husband friends. Wilson is equally unconvincing as an athlete and Rudd is the sweet-nice-guy who works for his rich father (brief appearances by Jack Nicholson) and who suddenly becomes poor for the convenience of the plot. The latter is definitely the second most uninteresting storyline of the film, with everything else coming a very close third.

The actual worst part of this two hour trudge is the sub-plot about George and his assistant, Annie. There is one particular scene in a hospital maternity ward with Annie, her boyfriend and new baby, which is simply an endless stream of banal, on-the-nose dialogue informing us that people should love people for what they are. The boyfriend has instructed George to film all this but George forgot to press the record button so we have to go through the entire thing again. The theatre exit doors have never looked more enticing.

The title for this film comes from the philandering Wilson, when he asks a friend “How do you know who you’re in love with?” Well, that’s an easy one for the girls; whichever one can’t afford to buy expensive jewelry and on that note, as many times as I’ve seen the girl return a ring onscreen, I’ve never actually seen it in real life. In fact, if the bling has enough carats, the un-betrothed couple are quite likely to end up on Judge Judy, which might not be the perfect ending for a romantic comedy but at least we won’t know how it’s going to turn out.