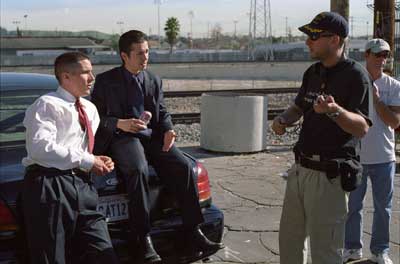 Jim Davis (Christian Bale), a recently-discharged Army veteran, has just returned to L.A. after serving in Iraq. Suffering from post traumatic stress disorder and haunted by nightmares of combat duty, Jim’s readjustment to civilian life has been anything but smooth.

First of all, his fiancee, Marta (Tammy Trull), has decided to move back to her native Mexico, until he is ready to settle down and make her an honest woman. Things don’t look good for Jim on the job front either, because his application to the LAPD seems to keep slipping through the bureaucratic cracks. 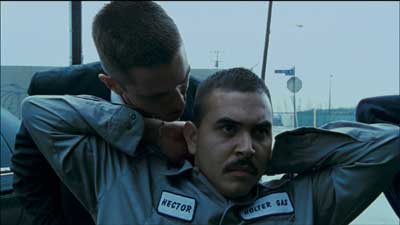 So, while waiting for word on whether he’ll be admitted to the police force, he hangs out on the mean streets of South Central with Mike (Freddy Rodriguez), his best friend since childhood. Mike isn’t exactly gainfully employed either, so the two cross over to the wrong side of the law and start dabbling in drug deals.

This development disgusts Mike’s girlfriend, Sylvia (Eva Longoria), who sees Jim as a bad influence. So, she kicks her man to the curb when he can’t commit to a serious relationship, leaving the two pals with not much to do besides cruising around the ‘hood looking for trouble. The problem with Harsh Times is that it takes the pair too long to find any, a big no-no in a picture billed as a gritty, inner-city action adventure.

The movie merely manages to create an edgy, ominous atmosphere, but fails to provide much in the way of bloodletting until the shocking denouement during which the messy resolution comes off as a bit of an afterthought. In the process, the movie squanders some sound performances, particularly those by standouts Christian Bale and Eva Longoria, and buff, character muscleman Terry Crews in a quickie cameo.

Rated R for profanity, drug use, and graphic violence.