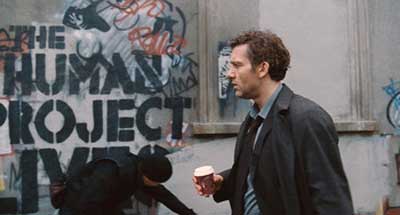 It is the year 2027, and humanity’s prospects are growing bleaker day by day, because a child hasn’t been born on the planet in 18 years. For some unknown reason, male sperm counts have dropped to the point of sterility. Anarchy has apparently erupted all over the planet, except for England which is being ruled with an iron fist by a despicable dictator who employs slavery and encourages mass suicide as means of population control. Amidst all this chaos, a resistance group emerges, and rebel Julian Taylor (Julianne Moore) has recruited her ex-lover, Theodore Fearon (Clive Owen), to assist with a top secret mission. Turns out that an African refugee, Kee (Claire-Hope Ashitey), has arrived in London, looking very pregnant. So she needs to be escorted ASAP to a sanctuary where the baby might be delivered safely before she’s killed. 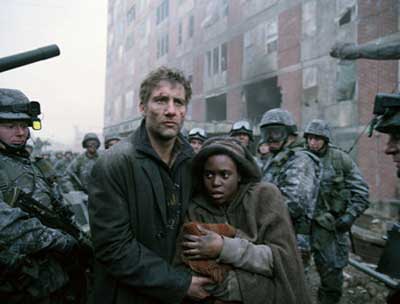 This is the doomsday scenario of Children of Men, an apocalyptic sci-fi adventure loosely based on the P.D. James novel. Adapted by Alpfonso Cuaron as an incoherent meditation on a dire dystopia, the movie, unfortunately, forgets to develop any of its characters.

As a result, sitting at a safe emotional distance from the picture’s protagonists, we are never really provided a reason to care about Kee or her baby. Yes, there’re a midwife (Pam Ferris) and a hippie priest (Michael Caine) who want to help, and a terrorist leader (Chiwetel Ejifor) with less honorable intentions. But this pity party pales in comparison to the backdrop against which it is set, a creepy countdown to oblivion because billions can’t reproduce and irrationally react to that fact by waging cannibalistic civil wars of attrition.

More amusing than compelling, like a campy episode of Lost in Space where anything goes and nothing makes sense. Oh dear! Oh dear!

Rated R for profanity, nudity, drug use, and graphic violence.