Will the millions of devoted Harry Potter fans enjoy this film as much as they’ve enjoyed the others? Some will, for sure, but many others will think it’s much, much too long, that it could have been cut in half and that it drags on like a death march, making its reluctant way to the final, tedious, 143rd minute.

Harry Potter, now aged 16, narrowly avoids capture by Voldemort, who has control over the Ministry of Magic and Hogwards. To destabilize Voldemort’s powerful position, Harry, Hermione and Ron set out to find three missing horcruxes, from which Voldemort derives his strength. 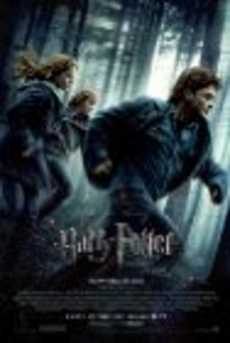 Although this is a film about magic, there is little enchantment to be found. The title, The Deathly Harrows, is not mentioned until over half way through, when we are read a story about three brothers who all tried to defeat death. This is a dark parable, and this is indeed a dark film, crammed with reams of expositional dialogue and lots of special effects that seem to act as fillers. Time often stands still, with the three chums living in tents, hanging out, chatting, having tantrums, and generally doing the same as mortals, which isn’t the supernatural experience we expect from the world of J.K.

There are, of course, lots of wands around the place which get Harry and co. out of so many scrapes it becomes tedious and this is lazy writing. Also, these wands achieve some complete miracles, so it doesn’t make sense that, when the three get captured and imprisoned by some thugs who don’t have a wand between them, no one so much as waves a finger. Up until this point Hermione, in particular, has been exceptionally active casting spells, beaming everyone off to deserts and heaven knows where else, but a few metal bars seem to render her powerless. What’s the point of being a wizard if you can’t even get out of jail free?

After 10 years, the producers are faced with the end of this financially phenomenal franchise. Their decision to stretch Deathly Harrow into two elongated parts is, they claim, an artistic one, in which case, why don’t they let everyone in to see Part 2 with their Part 1 ticket? Not as a gesture to all the loyal fans who have been shelling out all these years, but because it’s possibly the only way they’re going to be able to fill all those empty seats.