The visuals are spectacular (if you like 2½ D), and most of the music will have you dancing in your seat, but the story is dismal and the characters drag us from one non-event to another, uttering humorless dialogue in mismatched accents that are a perfect metaphor for the melange on-screen.

Eric (Ava Acres) lives with his mom, Gloria (Pink), dad, Mumble (Elijah Wood) and siblings in the Emperor Penguin Colony. All the penguins can dance except Eric, who has two left feet and this makes him feel like a misfit so, when an alien penguin, Ramon (Robin Williams), shows up, Eric and his two siblings follow him back to his colony. Mumble tracks down his missing children and the four set off on the journey home. In their absence, however, the colony has suffered a massive landslide; all the Emperor penguins are stranded in a deep ravine and it is left to Mumble and his children to save them. Meanwhile, two marine crustaceans, Will the Krill (Brad Pitt) and Bill the Krill (Matt Damon), are debating whether they should try and climb a little higher up the food chain. 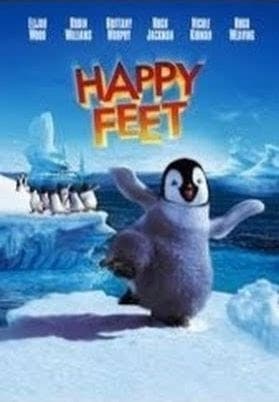 The first character we meet is young Eric, and it seems that it is going to be his journey that we will go on, but when he leaves the colony he is joined by his siblings for absolutely no good reason and after they reach their destination the plot runs around in circles for quite some time. First there’s Ramon, then Rainbow, then Sven, then three men in a boat and last but not least the particularly puzzling presence of the krill. None of these characters or sub-plots have any impact on Eric, each other, the penguins, the main plot or anything else and their stories seem to be nothing more than time-fillers.

What is screamingly underplayed is the big story about the stranding of the colony, which has no build-up of tension, no foreboding of a tragedy that could devastate generations of Emperor penguins and no sense of terror that Gloria will soon die in the unforgiving ravine. This lack of drama is exacerbated by a resolution that happens in a humdrum scene when Eric somehow manages to solve the impending Antarctic catastrophe by singing a very bad aria. I realize this is technically a spoiler but as the story has downgraded itself from a rambling narrative to a low-brow musical, I doubt that it matters.

At one stage it seems that this film will be about global warming, with grass appearing under snow and glaciers separating in almighty chunks, and this would have been the perfect vehicle for that hot topic. But this option is passed by and, instead of clever storytelling, preach-y dialogue recites uninformed platitudes that make penguins seem incredibly dull and will guarantee that every Imax in the Penguin Peninsular will be filled with row upon row of empty seats.