Getting On is a dark British comedy that has not yet made it to US television but, with the recent success of Shameless, it probably won’t be long. It’s set in a geriatric ward in a National Health Hospital and much of the humor is delivered by a rather vulgar nurse who insists on calling feces by its proper name.

Nurse Kim Wilde goes to work to avoid being with her seven kids. She’s blunt and earthy and gets through the day on cake and cigarettes. Sister Den Flicker is single but desperate not to be. She’s competent when she’s not surfing match.com and gets through the day on cake and diet drinks. Dr Pippa Moore is a dreadful snob and makes sure no one forgets where she came from. She has the bedside manner of a Gestapo commandant and, whatever she’s prescribing herself to get her through the day, it keeps her very thin. 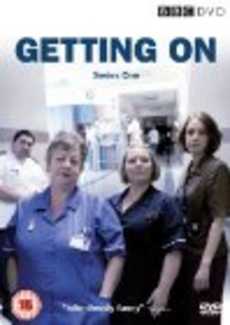 These three ladies are all also stand-up comedians and write the script together. As with Curb Your Enthusiasm, the dialogue in each scene is ad-libbed, making actors much more aware of each other and, despite having so much to think about, the three keep the pace of their exchanges running like a Swiss watch. They also satirize the National Health mercilessly and a lot of the time it seems the patients are actually the least of their worries.

The strength of this comedy lies not just in its characters but also in its realism. If a patient dies on the morning of their birthday, it seems perfectly acceptable to eat the cake that a relative brought in the day before, as long as that relative doesn’t show up to visit their loved one the same moment you’re tucking in. Sister Den still has sponge in her mouth when she delivers the bad news to the bereaved. It really is quite a moment.

When we laugh at scripted humor, it’s really our soul saying, “ain’t that the truth?” The writers of this show keep hitting this note, taking the minutiae of life, nurturing it and then turning it on its head and, if you visit Ward 4B often enough, you’ll get to realize how funny death really can be.