Brent Magna (Ethan Hawk) is a former race-car driver who has relocated to Bulgaria with his wife, Leanne (Rebecca Budig). A few days before Christmas, Leanne is kidnapped and Brent is contacted by the people responsible. He is instructed to go to a specified parking lot and steal a Mustang; if he doesn’t carry out this task, his wife will be murdered. Brent does as he’s instructed but, before he has time to drive off, ‘The Kid’ (Selena Gomez) dives into the car, holds him at gunpoint and demands he hand over the car keys. Brent wrestles the gun off her, and is then informed by the kidnappers that he’s got to take the girl with him. He does as he’s directed and the two set off on their journey. 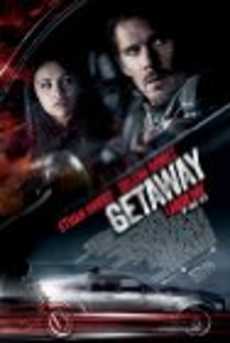 When Brent and ‘The Kid’ leave the parking structure, the kidnapper tells Brent precisely when to turn and where to go, and these instructions include plowing through a market place that is awash with pedestrians. Obviously, such reckless driving attracts the attention of the police, and a car chase follows – and then another – and then another. After a while, it becomes clear that there is no specific purpose to all this whizzing around, and it’s just action for the sake of action, and all that’s on offer is the cliched devoted-husband-must-do-wrong-to-save-kidnapped-wife plotline. When you know the running time of the film is 90 minutes, and you’re only 20 minutes in, it’s a chilling realization.

Obviously, the act of throwing two actors together is always suspicious, and the whiff of a franchise attempt fills the air. However, for that to happen, the two stars have to create some king of bond, so when they start laying down their lives for each other, it seems credible. Unfortunately, nothing about either of these characters is remotely anything, and it’s simply a yawn when Selena doesn’t make her escape when she gets the chance. It’s also a little distracting that Miss Gomez has seriously overdone her lip injections, and every time she’s in profile, her nose to lip-line looks like a ski-slope that ends in a sheer drop.

For reasons known only to the filmmakers, the closing song for this dark thriller is ‘Jingle Bell Rock,’ which is a jolly little ditty but has absolutely nothing to do with anything that happens in the film. So where did it come from? Well, there are a few Christmas trees at the beginning, so perhaps the connection is supposed to be between Hawk’s super-fast driving, and Santa’s equally fast sleigh. This is all a bit of stretch, of course, but then again, so are Selena’s lips.

To see the trailer: