A soggy underwater yarn about a search for a nearly 300 year old lost and found sunken treasure, Fool’s Gold like its story line, unfortunately, is old hat, all wet, and as rock bottom rummaging for narrative resuscitation as you can get. Try as they may, the confounding A-list cast counting Kate Hudson, Matthew McConaughey, Ray Winstone and Donald Sutherland just can’t salvage this high seas misadventure which, like its elusive treasure, sinks about as low as you can go in a vain search for an actual movie.

Matthew McConaughey is Finn Finnegan in Fool’s Gold, a slacker beach bum somewhere in the Caribbean (but filmed in Australia) who tends to get out of bed in the morning solely to feed his obsession diving around for the legendary Queen’s Dowry. Which reportedly comprises forty chests of gold lost at sea in 1715. Running serious interference is Moe Fitch (Ray Winestone), a dangerous local gangster who’s stalking Finn, with the intent of doing him major bodily harm when the stash is located. 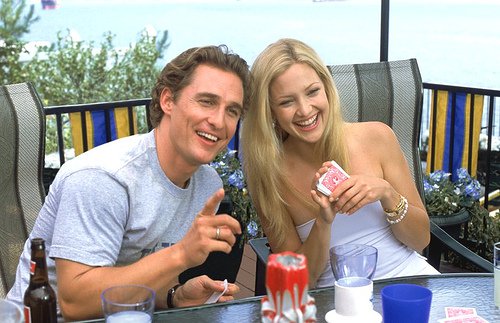 At the same time, Finn’s fed up wife Tess (Kate Hudson) is filing for divorce against her irresponsible mate, taking time off to do so from her gig as a steward on board the extravagant yacht of her filthy rich elderly boss, Nigel Honeycutt (Donald Sutherland). But Finn is brewing his own assortment of schemes, worming his way into Honeycutt’s good graces in order to charm the gullible geezer into a proposed treasure hunting partnership, while eluding Fitch’s cutthroat gang and pestering Tess to reconcile.

If all of this sounds like a far too convoluted, hyperactive and utterly meaningless way to spend a jaunt over to the movie theater, well, that’s exactly what it is. Writer/director Andy Tennant (Hitch, Sweet Home Alabama) makes an endless round of attempts to cover up his wafer thin plot with elaborately orchestrated constant chaos, including Kate repeatedly smacking around lots of big, burly men who pretend to be terrified by the frail female. Possibly the only remarkable accomplishment of the snoozer travelogue Fool’s Gold by the time the credits mercifully roll, is that the exhausting skirmishes and relentless head butting by the various overly aggressive, greedy parties in pursuit, make that enormous treasure trove, feel like its discovery could hardly matter less.