This documentary tells the tragic story of Ajmal Naqshbandi, a 24 year old Afghani, who worked as a Fixer for international journalists, facilitating, translating and gaining access so that they can write their stories. We meet him, we spend time with him and discover what a trusting soul he is as he assures us that the Taliban would never harm a fellow Afghani. He clearly clings to this belief when he is filmed in captivity and announces that he is safe because he is in the hands of fellow Muslims, in the hands of Islam. But his worried eyes tell a different tale.

Ajmal is employed by Daniele Mastroglacomo, an Italian journalist, to set up a meeting between him and the Taliban. This Ajmal does, and he, Daniele and Sayad, the driver, set off into deep Taliban country. They meet with some of the Taliban, during which it is confirmed that they are financed by their neighbors. “Pakistan,” they state, “supply us with everything.” Their meeting ends, and the three make their way back, but after driving for a few hours they are kidnapped, imprisoned and accused of being spies. 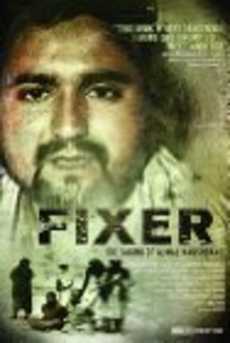 The filmmakers open with a visual of Ajmal and the words ‘He will be murdered’ are the headline, which shocks, but mars the joy of the time we spend with the charismatic Ajmal. Also, the story often cuts to 6 months before, and 2 months before, which in no way adds to the telling of this tragic tale. How it was is how it was, and that’s how we should see it.

The first person to die after the kidnapping is Sayed, the driver. He is slain in the presence of Ajmal and Daniele, while they are blindfolded. The Taliban then contact the Afghani government to negotiate the release of Daniele and it is agreed that five Taliban prisoners will be released. The exchange is made, and the journalist is freed. The Taliban then demand the government release two more prisoners so that Ajmal can be freed, but this request is refused. When questioned, the government defend their actions by explaining that the Italians constructed a road for them, and they wanted to express their gratitude, and at the same time reiterate that there will be no more negotiations with the Taliban. In that moment, Ajmal’s fate is sealed.

As disloyal and abhorrent as this is, the moment of judgment in this film doesn’t come from the Afghani Government’s behavior, or from the barbaric actions of the Taliban, but from Danele Mastroglacomo, the Italian journalist who was released. He is flown back to Italy and stands at the open door of the aeroplane, grinning from ear to ear, greeted by pomp and ceremony and his laughing family, which is all quite fine but, strangely, he has his arms raised in victory and one can’t help but wonder what victory he thinks has been won. Is it that it was Ajmal and not him who got beheaded by the Taliban, and died an agonizing death, because the murderers had not bothered to sharpen the knife?