Moving on through the days of the week from the assorted nuts of his collection of screen Fridays, Ice Cube stars in First Sunday as Durell, a stressed out estranged dad who can’t get a legit, even bottom rung job due to a felony rap sheet, and so has to resort to getting creative to concoct a cash-generating crime caper. And well he does in First Sunday, with Tracy Morgan as his kooky sidekick LeeJohn running accidental interference at every turn, as they scheme to take down a local Baltimore church and empty the collection box proceeds.

Writer/Director David E. Talbert manages to sweeten several serious messages here about the ordeals of ghetto life, with plenty of rowdy comic antics that make the more preachy Sunday sermon stuff go down easy. With its heart in the right place even as plot twists detour into some playful sinner territory, this inner city morality tale smooths over the rough edges, repetitious meanderings and a few dull spells to make room for substantial soul searching and tough love bad guy redemption. 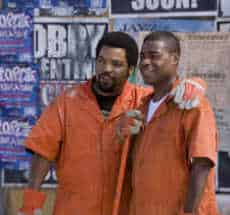 When Durell and LeeJohn get collared for a wheelchair heist, don’t ask, they’re stuck with community service duty sweeping up the streets. But Durell needs serious cash right away, because his ex-girlfriend is about to move down to Atlanta with his son if he doesn’t come up with child support. An initial idea to go see money lender Mordecai at a downtown massage parlor gets them into an exceedingly touchy situation, no pun intended. So Durell drags the faithful and gullible LeeJohn into a plan to rob a neighborhood church, by posing as new parishioners and infiltrating the vault.

But the plot of this lame duo gets foiled when they sneak into the church at night and the congregation is still there. Not to mention that the coffers have apparently been already pre-robbed, so to speak, and the guilty party is surely among the suspect flock. To make matters worse, the air conditioning has broken down and the sweltering surroundings are “hotter than Satan’s toenails.” So everybody is held hostage until Durell can figure out what to do with them. This includes Rickey (Katt Williams), the weirdly attired choir director who communicates primarily in wacko punchlines and musical sign language.

Though First Sunday doesn’t hold together too well as a solid story, but more as a mix of devilishly inspired skits, there’s pointed satire here about felons coming in more upscale snazzy three piece suits too. And Katt Williams, who serves as a kind of backdrop wild Greek chorus commentator rather than the star attraction he turns out to be, needs to be seen and heard more in his movies already, Amen.