Switching it up from the football field (Facing The Giants) to the firehouse with their latest movie, Fireproof, the evangelical filmmaker siblings Alex and Stephen Kendrick now join spiritually minded colleagues like Mel Gibson and Tyler Perry in transforming Satan’s headquarters – the multiplexes – into ministries of religious healing between handfuls of popcorn.

And though their church (Albany, Georgia’s Sherwood Baptist Congregation), which serves as the movie production company (utilizing the flock as its nonactors), claims as inspiration the needs of a neglected niche audience of Christian faithfuls ignored by Hollywood, ironically Fireproof’s actual target demographic is the very sinners more likely to frequent blockbusters. 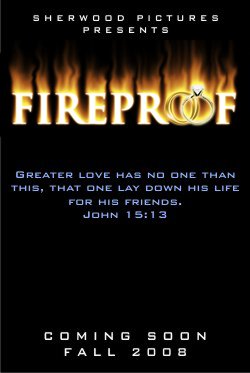 Fireproof spotlights the disintegrating marriage of young Albany, Georgia nonbeliever couple, Caleb (Kirk Cameron) and Catherine (Erin Bethea). Caleb is a control freak fireman hassling his fellow firefighters at work, and a grouch at home who complains that his working wife doesn’t do the dinner and laundry.

When Catherine gets fed up with Caleb’s constant nagging, she files for divorce. But his dad insists that the distraught spouse hold up finalizing the breakup for forty days, during which time he is instructed to seek guidance from pop’s religious diary, a blueprint for marriage mending.

Catherine is portrayed as a cold fish fretting over an invalid mom in need of a better wheelchair, and she’s currently succumbing to the flirty advances of a doctor at the hospital where she works. While Caleb is a cyberspace voyeur who beats up inanimate objects like his garbage can when he’s mad, and eventually that devil made me do it computer too.

Between bouts of both religious and romantic doubts, there’s lots of alternating arguing and praying too. And even a few chubby court jester types back at the firehouse, who dispense comic relief on occasion between all the hand wringing. (Do you really hire pudgy dudes as firefighters?) And while Caleb becomes a model husband after finding Jesus, he never does apologize to a fellow firefighter whom he burned – with a hot sauce prank, that is.

Fireproof puts forth fairly rigid doctrine in a script implying that relationship incompatibility is not an option in God’s eyes. And that any bad marriage can be saved by Jesus, as long as a brand new wheelchair is tossed into the heavenly negotiations too.