Equal parts inner city musical and big screen afterschool special, How She Move sets about challenging the formidable forces of gravity that propel the mysterious energy of dance gyrations into flight, and likewise apply immobilizing peer pressures reinforcing ghetto poverty’s demoralizing status quo. Set in the chaotic and self-destructive adolescent mean streets of Caribbean-Canadian Toronto, Ian Iqbal Rashid’s How She Move is less effective in its familiar storytelling spun around personal aspirations up against social conformity, than when it just about forgets it’s a movie and lets the wild fervor of the show take over. Though an acquired taste for step dancing and the related music are a given here, or else that dynamic novelty can soon wear thin and settle into raucous monotony. 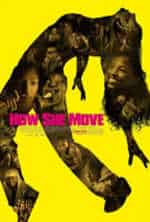 Rutina Wesley is Raya, a bright and determined high schooler whose academic achievement enabled her to be accepted into an elite prep school in an affluent community far from the hood. But when her sister dies from a drug overdose, Raya’s parents go into debt and can no longer afford her tuition and room and board payments. Raya returns home reluctantly and resentfully, and when she’s forced to attend the local public high school, she starts dumbing down and acting out, in a kind of reckless retaliation against her fate.

And though her future hopes are dashed for now, Raya still retains that forceful personal drive to succeed, and she is soon channeling it into the neighborhood step dance competitions. No consignment to typical background sex wallpaper cramping her style, Raya in a show of muscular gritty girl power, remarkably holds her own with some of the other females, even against the greater strength, energy and endurance of the male performers. Eventually the dancers settle enough old scores among themselves to summon up sufficient team harmony to enter a big national competition.

How She Move should have spent less screen time on its impressive but increasingly repetitious dance routines, and with more emphasis applied to delving into individual feelings and emotions, which more often than not comes off simply as predictable teen rage. Also given woefully little space to shine as compassionate and complex personalities are Raya’s struggling immigrant parents, played by Melanie Nicholls-King and Brennan Gademans. A little less stepping on stage and more stepping into character would have made for a more vibrant blend and satisfying fusion of rhythm and drama.