Get Ready for Rutina!

After studying at the Las Vegas Academy of Performing Arts, Rutina Wesley attended the University of Evansville where she received her BFA in Theatre Performance. Next, the attractive, Las Vegas native matriculated in the prestigious Juilliard School’s Drama Division, performing in productions of Macbeth, Richard III and The Winter’s Tale to The Marriage of Figaro, Rebel Armies Deep into Chad and In the Blood, among others.

Rutina also spent a summer studying Shakespeare at the Royal Academy of Dramatic Art, where she landed the title role in a production of Romeo and Juliet. And since graduating from Juilliard in May of 2005, she’s exhibited such an impressive emotional range that Oscar-winning director Sam Mendes cast her opposite Julianne Moore in the Broadway production of The Vertical Hour. 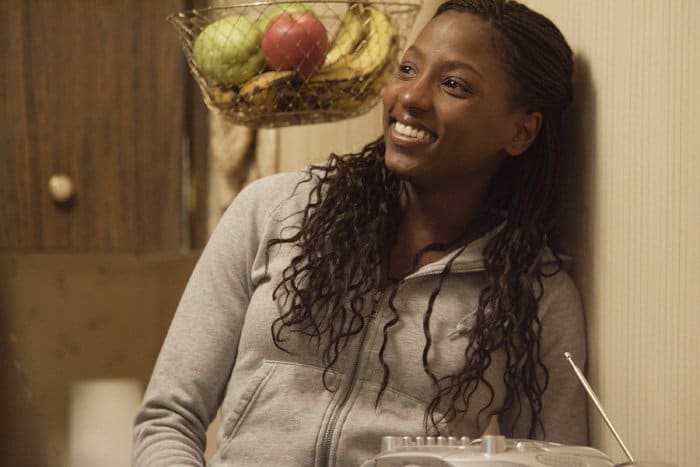 So, it’s no surprise that the charismatic young actress was tapped to make her screen debut in the lead role of Raya Green in How She Move. Here, the promising young star of tomorrow talks about this inspirational, inner-city saga where she plays a prep student who has to return to her crime-infested ghetto neighborhood when her parents can no longer afford the tuition.

KW: Thanks for the opportunity, Rutina.

RW: Not a problem. Thank you for having me. I appreciate it.

KW: Given your classical training, what interested you in this script?

RW: Honestly, when I read one of the first lines, which was, “Chocolate-stained skin,” I was immediately drawn to that, because I’m a dark-skinned female, and it’s something that I’ve, my whole life, struggled with, being considered too dark by some, and all that stuff. But I also just related to Raya because she’s very driven, she’s passionate, she sets goals for herself, and she goes after them on her own terms. I think that as a young lady, you start off not knowing what you want to do, and then you kinda arrive at yourself by the time you’re 17 or 18, hopefully. And that’s what I did. In high school I was figuring out what I wanted to do, and by the time I was 18, I settled on being an actress, and began seriously pursuing that goal.

KW: Where are you from originally?

RW: I grew up in Las Vegas, born and raised.

KW: Soon after Juilliard, you landed a role on Broadway as one of the five original cast members in The Vertical Hour. How was that experience?

RW: That was one of the most amazing experiences of my career, because a young actor could not ask for anything more than to work with people of the caliber of Sam Mendes, Julianne Moore and Bill Nighy. They’re so good at what they do, I learned so much just by watching them. And they treated me like family. I was very, very, very lucky to have that opportunity. It was one of the greatest experiences I’ve had.

KW: Now you’re in How She Move which is so much more than just a dance movie. It has a richness and depth which reminded me of Love Jones.

RW: That’s how I feel about it, too. The dancing is great, but there is this beautiful little story behind it that’s positive and hopeful for our community.

KW: I was very pleasantly surprised by the movie. It even made me cry. And you did a great job.

RW: Wow! Thank you. I’m really glad you enjoyed it. Wow! Thanks.

KW: Did you identify with your character, Raya?

RW: Definitely. I had definitely made sure that I got out of Las Vegas after high school. I knew that if I stayed there, I wouldn’t have been able to pursue my dreams as an actor or dancer. My family always told me to dream big, so I made sure that I got out of there and explored new places, because the world is huge. And I’m still learning new things every day in this business and in my life.

KW: Now, this is your screen debut. How much pressure did you feel in the lead role?

RW: It was a lot of pressure. Your nerves can get the better of you, especially when it’s your first film. But Ian [director Ian Iqbal Rashid], from the beginning, made me feel right at home, and reassured me that the part was mine, and that I didn’t need to worry about whether I was going to have the part the next week. So, I was able to relax, enjoy myself, and live in the moment.

KW: In the movie, your character has an accent since her family is from Jamaica. Do you really have a West Indian background?

RW: No I don’t. I had to work on the accent with a dialect coach. Raya, remember, went to a prep school, so her dialect had to be a bit more proper than her parents. But when she came back home, we threw a little more of her roots back in there to make her a little more tangible, and to contrast how she is at home versus how she is at school, because that really happens.

KW: Do you think Halle Berry’s Oscar win opened up roles for all black actresses, or just for lighter-skinned actresses?

RW: I think Halle opened the door for all of us. As black women, we should all stick together, and if someone gets there first, you’re setting an example for those behind you. So, I definitely look up to Halle Berry. And Angela Bassett is my role model. And Viola Davis is another actress who I love and adore. For me, I’ve gotten away from feeling I’m too dark. We’re all women of color, and a lot of us are doing some great things. I think it’s important the great things that we all do instead of asking, “Why didn’t I get this?” or “Why did the light-skinned girl get that?” instead of focusing on the positive. That what I and some girlfriends of mine are doing, celebrating all colors and all ethnicities of women of color. That’s a better way to go, rather than bringing all the negativities into it. It so much easier to smile and have fun than it is to hold grudges.

KW: I hope that your powerful performance here will open things up further in terms of colorblind casting.

RW: Thank you very much. The reason I trained so hard in school was so that I could be versatile and play any character. With all these in my bag, I’m like a chameleon. I always tell other young actors to go to school, or at least watch movies to learn as much as you can.

KW: Do you think you will still be able to go to the mall after this movie opens?

RW: My grandmother thinks I won’t be able to, but of course I will. I don’t know what it will be like, but it’s exciting.

KW: What message do you want the audience to get from How She Move?

RW: I would like for the young generation to walk away from this movie inspired about their lives and about the possibilities that are out there for them.

KW: Would you describe yourself as happy?

RW: [Laughs] Yes. I feel incredibly blessed. I’m happy, but all of this movie business, and working as an actress is really hard. When you’re not working is when you have to stay positive and remind yourself that you’re talented. What’s due for you is due for you, and you don’t know when that’s going to come. That’s something I struggled with after I got out of school, wondering how long I was going to have to wait. Then beautiful jobs started coming to me. Now, I feel that my path is going to be what it’s going to be, and as long as I relax and breathe, I can enjoy it. I think that an actor shouldn’t work from a place of fear, because it’ll show in your work. You should work from a place of contentment, relaxation, and coming from your heart, and from the truth of yourself.

KW: Columbus Short gave me that “Are you happy?” question when I asked him what would be a good question to ask him.

RW: Yeah, some people assume you’re happy, because you just did a movie. And you’re like, “Maybe not.”

KW: The Jimmy Bayan question. Where in L.A. do you live?

RW: I’m in the Hollywood area.

KW: What’s up next for you, career-wise?

RW: I’ve thought about producing, maybe way, way, way down the line, because I do have a lot of friends who are amazing writers. I’d love to have a production company where I can produce more black films, period pieces, for instance, like Shakespeare, with an all-black cast. There are lots of ideas that I have, but all in due time.

KW: Well, best of luck with everything, and thanks for the time.