Obviously, director Michael Haneke wasn’t satisfied merely with having made Funny Games in German for the kinky S&M enthusiasts in his native Deutschland. No, he was apparently so self-impressed with his disturbing snuff flick that he had to shoot a virtually-identical, English-language version, ala Gus Van Sant’s scene-for-scene, line-for-line remake of Psycho.

But while that Hitchcock classic may have been very worthy of an homage, Funny Games is just a disturbing headscratcher likely to leave an audience feeling more abused than entertained, and also wondering how an Oscar-nominated actress of the caliber of Naomi Watts (for 21 Grams) ever agreed to the project. Equally-ponderous is the question of why it ever got greenlighted in Hollywood in the first place

Nonetheless, the picture has been released in theaters, which makes it my job to warn you of the morally-objectionable content of this inappropriately titled indulgence in bloodlust. For Funny Games has nothing to do with either fun or games, unless you consider lingering scenes of bondage, torture, animal cruelty, splatter, sexual assault and eroticized violence fun and games. If there were truth in advertising, its title would be Gruesome Murders.

This whodunit might best be described as an endurance test during which the director all but directly dares you to walk out of the theater. For instance, he’ll have his villains occasionally break the proverbial fourth wall to comment on their latest diabolical deed. And on one occasion, he even lets a creep rewind a fight scene to change the outcome.

Superficially, the set-up reads like a stock plotline ripped right out of the psychological thriller script book. As the film unfolds, we find the Farber family, Anne (Watts), George (Tim Roth) and George, Jr. (Devon Gearheart) on their way to spending their summer vacation at their sprawling country estate which shares a lake in an upscale community comprised of the idle rich.

Before they get a chance to settle into the house there’s a knock, and the Mrs. is asked by an overly-polite, handsome young stranger (Brady Corbet) if he might borrow a few eggs for their next-door neighbor, Mrs. Thompson. Despite his manners, there’s something odd about Peter, and it’s not just the fact that he’s wearing white gloves. 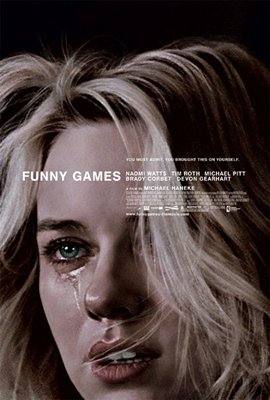 He creates diversions for a few minutes until his pal Paul (Michael Pitt), also clad in white gloves, arrives and finds further excuses to dilly-dally. When asked to leave, the rude pair finally informs the Farbers that they’re being kidnapped, and apparently for kicks.

The preppy psychopaths then proceed to kill the dog, break George’s kneecap with a golf club, make Anne strip naked in front of her son, and worse. Without divulging any specific subsequent developments, let me say that, at this juncture, the movie defies convention and degenerates into further displays of anti-social behavior, sadly sans consequences for the crooks.

Naomi Watts might want to fire her agent for attaching her to this infuriating fiasco. Walk-out bad.