It’s nearly a given that Americans learn most about ‘history’ at the movies, not in the classrooms. And where more often than not, there’s always one side to every story. So it’s no surprise that people in this country believe that the WW II Japanese kamikaze pilots who deliberately flew their planes into US naval warships, were simply crazed, screaming fanatics trying to impress their emperor. Risa Morimoto’s very personal yet historically complex documentary, Wings Of Defeat, sheds a very different light on those young men, some of whom are still alive to tell their quite sad and compelling story.

Morimoto has crafted Wings Of Defeat not only as a cinematic inquiry, but as someone who has an intimate, tragic connection to those times. Though born and raised in New York City, Morimoto discovered only recently that she’s the niece of a kamikaze pilot who died twenty years ago in Japan. For the secrecy and embarrassment that exists in connection with those thousands of kamikazes, hundreds of whom survived because they were still in training when the war ended, is not unlike the silence that shrouds the Vietnam War era here in the US. 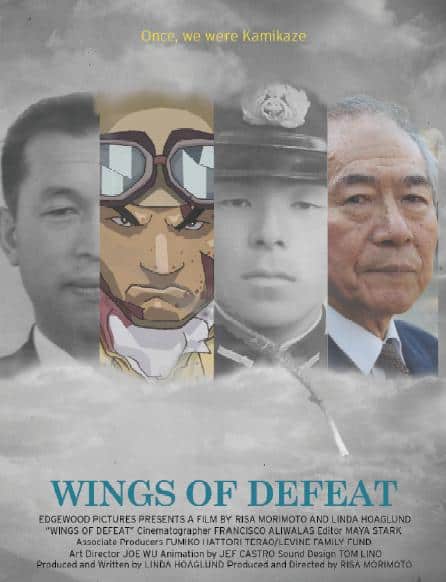 And so Morimoto made the painful journey to Japan to discover through her film, the mystery surrounding her late uncle’s life along with the other pilots. Her inquiry is penetrating and also balanced, as she allows surviving elderly kamikazes, family members of those who were killed, and sailors who were aboard those targeted US ships, a shared spotlight in her film. And it is her initial hope that as an outsider, she can ease the sting of recollection.

While the US veterans are puzzled that the kamikaze pilots would readily give up their lives – several even confessing that they didn’t have the heart to shoot them down – while the Americans were fighting for their own survival, the former kamikazes themselves and these families have far greater difficulty expressing their opinions or feelings. In fact, some are speaking about the subject for the first time ever in their lives, to the camera rather than to their own spouses or children. A profound survivors’ guilt also hovers in the air, along with chronic despair and buried pain, wherever Morimoto makes her rounds.

And it’s not just about the collective shame of being vanquished in a war. What comes to light through Wings Of Defeat, is a military brutality that forced most of these young men to sacrifice their lives. Many were in fact as young as fifteen and sixteen years old, dragged out of their schools, plied full of sake wine, and given a one way ticket so to speak – that is, not enough plane fuel for a return ride – and sent on their way. In effect, those boys not old enough to legally drink or drive, were ironically forced to do both out of obedience to patriotic duty.

Some were beaten and starved into submission, while others were pressured into believing that they were saving their countrymen, who would otherwise be massacred by the poised US invaders. One survivor recalls how a fellow pilot went on his mission only after learning that his young wife had flung herself and their two children into a river, so he wouldn’t have to endure the suffering of knowing that he was leaving them behind. Another shows Morimoto his ‘funeral portrait’ taken just before he was supposed to fly on his own mission. He remembers that everyone was ‘dying on the inside’ but kept smiling. His parents and sons had never before heard him speak a word of what he describes as a grim time.

What is also striking on a more political level, is the similarity of language contained in the war rhetoric, that continues to be echoed today as rationalization for foreign aggression. The Japanese government so effectively persuaded the country to rally behind the war effort, because they insisted they were pushing Western imperialism out of Asia and ‘liberating’ Asian countries from US tyranny and predatory designs. And the kamikaze assaults, which were not implemented until late in the war, rather than a novel military tactic, were simply last acts of desperation, as Japan itself metaphorically nosedived into its own demise. That is, when fuel and supplies had nearly run out, and human beings as bombs became a military weapon of last resort.

The numerous melancholy threads of Wings Of Defeat come together in the end with an unanticipated inspirational optimism. Morimoto is saddened about her uncle, but relieved to discover that he was set up to be martyred by his country, not for them. And while the family sweeps and washes his grave during a visit to the cemetery, one elderly former kamikaze feels a renewed determination to fight for permanent peace on an otherwise doomed planet, while expressing a desire to meet those American sailors in the film who had spared his comrades.

Wings Of Defeat is an exemplary scrutiny of the emotional and psychological manifestations of patriotism. And a candid and bold challenge to the whole notion of preconceptions and stereotypes.

Wings Of Defeat will be screened at the Japan Society in New York City on March 18th, and at Georgetown University in Washington DC on March 19th. More information is online at: wingsofdefeat.com.