Raising more questions than it answers, but all of them intriguing in any case, Family Portrait In Black And White is a documentary focusing on a highly unusual foster mother in the rural farming village of Sumy in the Ukraine, and her massive brood of 23 orphans, sixteen of them abandoned biracial children. The Old Woman Who Lived In A Shoe, anyone?

In the course of following these school age children through their daily routines in a primarily home movies format, we learn little about the white orphans. But that the biracial kids are apparently the offspring of African exchange students, and Ukrainian mothers who have rejected them because of a widespread prevailing racist culture. And, in contrast to official attitudes espoused under the Soviet Union, which embraced racial solidarity with African and other Third World nations. 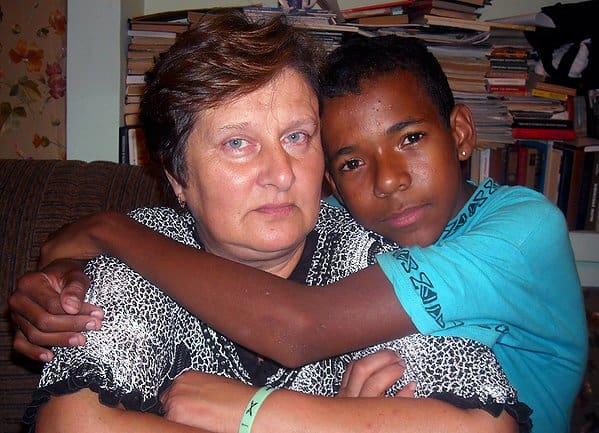 Presiding essentially singlehandedly but with striking self-confidence and control over this quite large number of children is possibly fiftysomething Olga Nenya. Little information is forthcoming about her, in particular Olga’s initial passion for this challenge and what her own personal and family life has been all about. But any mother out there who has struggled to raise even two children alone, can attest to Olga’s amazing fortitude and patient, abundant love, though at times overbearing possessiveness, warts and all.

What does emerge, is the portrait of a country’s racism tragically inflicted on nonwhite inhabitants, and quite blatantly with the post-Soviet emergence of neo-nazi skinhead activity in the Ukraine. Though that profound social change and its link to the new market economy and ensuing poverty and unemployment, along with the concurrent vast epidemic sex trade targeting young women in that region, begs for some exploration as to historical cause and effect.

Where the documentary leads seemingly by chance in a surprising secondary direction, is the uncovering of an ideological conflict running parallel to racial issues. As some light is shed on the sketchy portrait of Olga at hand – who would have come of age under socialism – and at times in contentious contrast to her children.

Namely, her post-Soviet nostalgia for allegiance to the collective, which she may have somehow sought to embody in her aspiration to create this sanctuary for children. And ironically, contending with some of them who have been drawn to the more recent western influenced self-indulgent cult of individualism. So whenever Olga is seen clinging to the independent-minded older children with undue separation anxiety in seeing them go, a deeper yearning for a past that has slipped away historically, makes itself felt palpably as well.

Trailer of Family Portrait In Black And White: