At first blush, this picture superficially reads like the typical opening of a Dragnet episode. After all, it is set in L.A. and starts with a voiceover informing the audience that what you are about to see is true. However, that’s where the similarities between the classic TV series and Crazy Eyes begin and end, since the latter is an offbeat romantic romp rather than a sobering crime story narrated by a glum gumshoe.

Here, the protagonist, Zach (Lukas Haas), is a wealthy playboy who boasts about having 4 1/2 women on speed dial should he find himself in the mood for a booty call at the end of any evening. That self-indulgent lifestyle doesn’t sit well with his ex-wife (Moran Atias), since it results in his forgetting when he’s supposed to take custody of their son (Blake Garrett) sorely in need of quality time with his emotionally-unavailable dad. 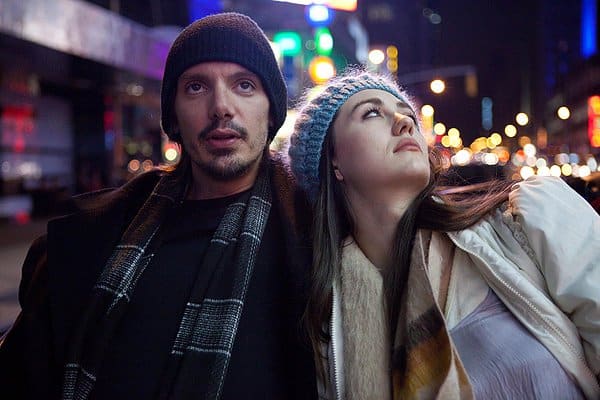 Zach’s also routinely nagged by a persistent black girlfriend (Regine Nehy) who keeps calling from the East Coast. She’s so desperate for a visit or at least a little phone sex that she seductively whispers “I love you” into the receiver, ignoring his begging to leave him alone.

Besides being surrounded by frustrated females, Zach has a substance problem, too. That’s not much of a surprise, given that his best friend, Dan (Jake Busey), is a bartender and his primary enabler. After hours, they’re fond of doing lines of coke in his hot tub with loose ladies they picked up at the club.

The plot thickens the day Zach finally meets his match. That would be Rebecca (Madeline Zima), an attractive, if uncoordinated lush he decides to refer to as Crazy Eyes. She’s able to resist his considerable seductive powers, ostensibly holding out because he’s promised to take her to an art gallery exhibiting the work of Hieronymus Bosch.

Rather than find someone else to sleep with, Zach inexplicably becomes intrigued and what ensues is an ill-advised dating ritual marked by overindulgence, passing out inebriated together, totaling a car, a DUI and intermittent barfing. Will Rebecca get to see Bosch? Will Zach ever get lucky? Will they ever clean up their acts?

Sadly, none of the above is necessarily important to a couple of decadent drunks already in Drunk Heaven.