Arriving just in time to fan the flames a bit more during the current heated health care debates, is Extraordinary Measures. An every man for himself health care hell drama about a determined dad in desperate pursuit of treatment for his two young children dying of a rare genetic disease, the film is based on an actual story of one father’s ordeal in battling to jump start research into a potential life-saving drug, when the bottom line profit-driven pharmaceutical industry could care less. And while his efforts are celebrated in this story, one can’t help but wonder repeatedly along the way, why frantically saving lives in this country is inevitably about money and not morality.

Brendan Fraser is John Crowley is Extraordinary Measures, a Jersey businessman whose children, ages six and eight, are confined to wheelchairs with the degenerative Pompe Disease, that no child has survived past the age of ten. When Crowley learns of a research scientist in Nebraska, Dr. Robert Stonehill (Harrison Ford) who is looking into a treatment drug for the ailment, he goes in search of Stonehill to seek his help. 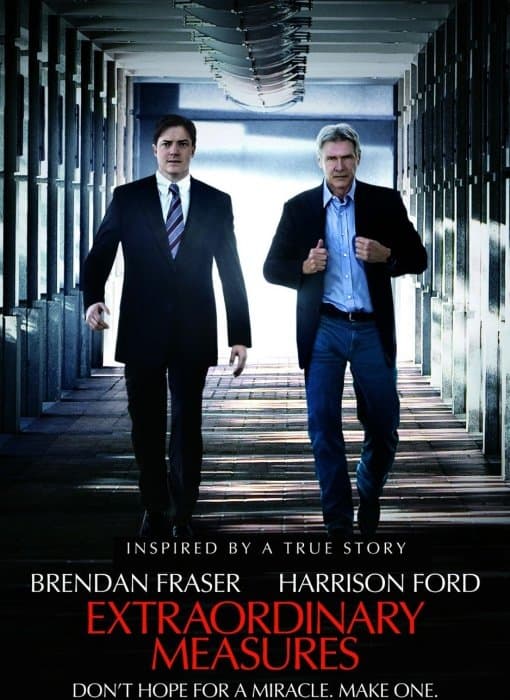 The problem is that the scientist is a disgruntled and temperamental guy with serious anger management issues, resentful that he receives only a pitiful amount of funding which hinders his research, even as far more money is doled out to the athletic department at his university. But Crowley, at wit’s end and racing the clock to save his dying children, is ready to give up everything – even ‘give them my balls in a jelly jar – to have Stonehill discover a miracle drug. Including quitting his job to set up a foundation in order to raise the necessary funds, and pestering skeptical pharmaceutical corporate honchos to mull potential profits, unlikely to be had in addressing a disease that affects few people. Though treatment, as is well known, is far more favored by the drug industry than cures, which inevitably put them out of business without sick patients, or rather customers around.

Based on Wall Street Journal writer Geeta Anand’s book, The Cure and directed by Tom Vaughan (What Happens In Vegas), Extraordinary Measures is a breathlessly paced story of enormous determination against nearly overwhelming odds. But one in which the question of why, and what all the fuss has to be about, is never addressed. And why the ornery Dr. Stonehill in this drama, is the enraged and difficult man, when it’s really about how a difficult privatized medical system made him that way. In a caring and compassionate culture – and they in fact do exist elsewhere – a government which never has difficulty coughing up billions for foreign military ventures, would simply provide the relatively small amount in comparison, required to save children, however few they may be. But this thorny subject right now of government funding, with the health care debates raging, is oddly never a topic on the table in the film.

In other words, why must one’s survival be contingent on the profit to be made from doing so, and the related dubious generosity of corporations where illness comes with a price tag. And say, instead just letting dads be dads, and not brokers promoting stock portfolios as a kind of ransom for their children’s lives. Which renders this drama ultimately promoting gratitude to drug companies, a bitter pill indeed.