A poetically crafted, politically heartfelt debut for writer/director Mark Webber, Explicit Ills lyrically weaves its ways through a series of seemingly disconnected private inner city moments of its culturally and economically disparate characters. The semi-autobiographical account of coming of age in Philly for this twentysomething filmaker, captures that sense of youthful alienation in an enigmatic world, and at the same time a mature grasp of both emotional confusion and sociopolitical certainty.

Webber imaginatively intertwines the resonant sights and sounds of Philly neighborhood life as intimately experienced by numerous conflicted characters and families. The vignettes include the more weakly conceived portraits of drugged young yuppies with artistic aspirations, and an African American family trying to enlighten the community about healthy eating, while searching for money to open a health food grocery and dealing with raising a withdrawn teen. There’s also the vigorous but abbreviated dramatic thread touching on a struggling young actor (Paul Dano) experiencing the psychological turmoil of discovering his creative identity in a society indifferent about providing any welcoming clues. 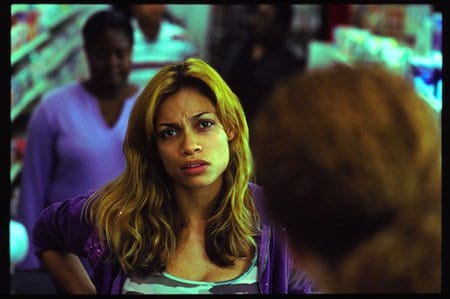 But the emotional anchors of the story are Rosario Dawson as an impoverished Latina single mom, and the asthmatic little boy she’s raising who views the world in his tender innocence, as his extended family that he’s on a mission to heal. And the quietly radiant performance of this diminutive child actor breathes an uncommon heart and soul into the narrative.

Explicit Ills eventually sorts out many of its elusive strands with surprising and uplifting clarity. And a determined socially conscious focus on the dismal, all too explicit diseased state of commercialized health care, in a country where patients are inhumanely treated as ‘customers, not sick people.’