A love story that begins with at least one car accident and two septuagenarians tending to their separate set of health issues, may not seem exactly the ideal circumstances for a buoyant romantic comedy. But Spanish director Marcos Carnevale conjures these most improbable situations for Elsa & Fred, and spins an irresistible magic that audiences are as likely unable to resist as the two geriatric lovebirds in question.

Manuel Alexandre is Alfredo, a recent widower whose brash and domineering daughter Cuca (Blanca Portillo) relocates him to a smaller apartment in Madrid, the better to pressure him to invest his savings in her jobless spouse’s plan to open a downtown cyber-cafe. When Alfredo’s ditzy elderly neighbor Elsa (China Zorrilla) backs her car into Cuca’s, a not uncommon occurrence for the vivacious though easily distracted and apparently uninsured woman, Cuca’s nasty confrontation with Elsa unwittingly draws these two lonely new neighbors into a simmering relationship.

Though, it’s not exactly a match made in heaven, at least for starters. Alfredo is an introvert who frets obsessively about his health – which may be perfectly fine – and has led a predictable and dispassionate life. Elsa, on the other hand, has always been more into joie de vivre, bordering on reckless. An Argentine immigrant who married a younger man and then took up with a male stripper because her spouse lacked interesting vices, Elsa in her golden years has crossed the line between a vivid imagination and outright fibbing. She’s also cultivated an overpowering identification with Anita Eckberg – specifically in Fellini’s La Dolce Vita – and keeps the famed Italian fountain scene from that erotic classic on her wall. 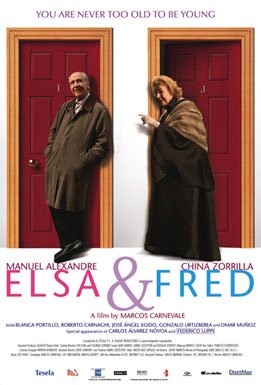 Elsa & Fred actually references two magical movies. In addition to La Dolce Vita, there’s also a hint of Ginger & Fred, another Fellini confection in which the late Mastroanni and Giulietta Masina of La Strada fame team up as divine elders, to bring the Fred Astaire and Gingers Rogers elegant mystique back to life.

Elsa & Fred, yet another confirmation of Virginia Woolf’s wise observation that the brain has no age. But rather is simply an unshackled free spirit in its very own euphorically conceived cosmos and on its determined mission, wherever that might lead.