This film kicks off with a dazzling set piece that lays the groundwork for a unique action thriller, but unfortunately the filmmakers fail to follow through and unique becomes cliched and action becomes gory. But there are enough thrilling moments to keep the adrenalin pumping and experiencing Gosling do broody is definitely a thrill all of its own.

Driver (Ryan Goslng) is a car mechanic who doubles as a Hollywood stunt driver and moonlights as an ace wheelman for the robbing fraternity. When he moves into a new apartment he befriends Irene (Carey Mulligan) and her young son Benicio (Kaden Leos) whose father, Standard (Oscar Isaac) is released from prison a week after the neighbors meet. On his release Standard is pressured by the local mob to pull off a heist to repay them for the money he borrowed when he was in jail and, when Standard refuses, his family is threatened, which is when Driver steps into the fray. 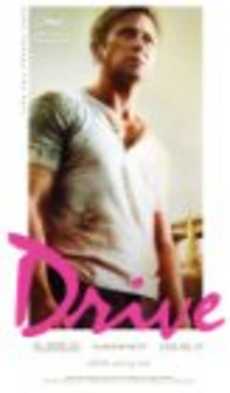 The title is ‘Drive’ and between Driver’s stunt driving and moonlighting there is enough material to take the story in either direction, if not both, but instead these possibilities get side-lined by a mob plotline that we’ve seen many times before. Also, Driver’s talent behind the wheel quickly becomes secondary to his ability to beat the shit out of anyone who gets in his way and, while we like our protagonists to be all-powerful, these superhero tactics feel unlikely after a while and what so fascinated at the start becomes merely back story, lost in a maelstrom of pumping, bloodied wounds.

It’s a long, long time before Driver utters his first words, which is initially fascinating, but when the curtain falls and he’s still a mystery, it leaves a gap. We get some painfully clunky exposition about the day he asked Shannon, his boss, for a job repairing cars, and some equally clumsy back story about Shannon himself, but it is never explained where our hero learned his skills and how he ended up on the wrong side of the track. What is also missing is an ending that tells us what this film has to say, and instead violence rules which gives us no idea what Driver’s next step in life is going to be.

Gosling’s understated style works well in this thriller and, as he flicks off his enemies, we route for him to survive, even though he leaves a bloodied trail. But this trail becomes a little too sullied when he keeps pummeling at an adversary’s skull long after the poor guy is dead, which is not only a further step away from the flashy driving that wowed us at the start, but also makes this into a story about how Ryan Gosling, after playing one too many nice guys, finally found his inner psychopath.