This story takes a long time to get going, and the mystery of Dorian Gray’s portrait is never explained, but there’s a real sense of time and place and the two main characters draw us in and prove that you don’t have to like who’s up there on the screen, you just have to get them, and who doesn’t get a guy who has such a good time that he misplaces his soul? Exactly.

Dorian Gray returns home when his father dies and he is now the new lord of the manor. He is welcomed by the high society into which he was born and particularly by Lord Henry, who assumes the role of mentor. Henry consistently spouts forth his views on life and pours praise on Dorian’s beauty and youth which, Henry claims, are the only two things worth having. To capture this beauty, an artist creates a masterpiece and the canvas becomes the catalyst from which the story of Damian’s life evolves. 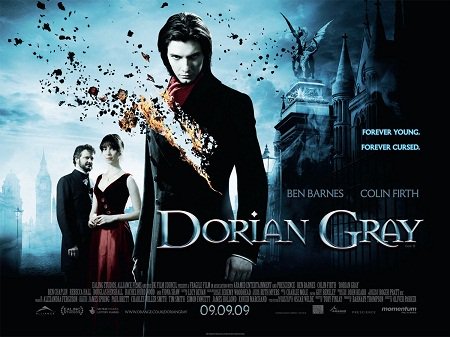 It’s interesting that some things never change, and Lord Henry’s idea of showing his mentee the ropes is getting him hooked on cigarettes, hitting the gin by lunchtime and whiling away hours in the local whorehouse. The new, chemically enhanced Dorian becomes so spellbound by his Lord that he not only does his bidding but also takes on his persona, sharing his cynicism and treating people with a disdain that only true snobs can muster. Lord Henry really does know how to throw a party.

Unfortunately, the great friendship between the two men ends when Damian grows restless and asks Henry to come with him on his travels. Henry is suddenly bereft of passion for the life of debauchery he has encouraged Dorian to live and declines, stating that he must stay with his family. It becomes clear at this point that Henry has been driving Dorian only so that he can live vicariously through his charismatic young friend, making Dorian the victim of another man’s unfulfilled dreams. There can be no greater waste than that.

Classist Britain is played to the hilt, but the filmmakers do make a faux pas with Henry’s daughter, who should sound as if she’s got a plum in her mouth but instead has a London twang. This might not seem like a big deal to those from outside the UK, but inside, accents are everything and a perfect example of this is Michael Caine, who can make as much money as he wants, but he’ll never be regarded as anything but working class because, unlike Damian, he had to work for a living, and for which we are all, of course, truly grateful.