Don McKay is billed as Jake Goldberger’s debut mystery thriller and is described by the filmmaker himself as a “film noir,” inspired by the Coen Brothers’ intricate yarn, Blood Simple. These are tempting appetizers so disappointment is heightened when this film fails to deliver one single moment of true tension and although the mysteries of plot and character are finally revealed with the high drama of a game of Cluedo, it’s a matter of far too much, much too late, and the audience is left feeling cheated that the filmmaker let the characters take their journey alone.

We first meet Don working as a high school janitor, mopping floors and cleaning paintwork. He receives a letter, spends a split second in thought, and the next time we see him he is travelling back to his home town. So what do we learn about Don McKay in this all important setting up of his character? We know that he works as a high school janitor, which entails mopping floors and cleaning paintwork that he receives a letter that he is now returning to his home town. 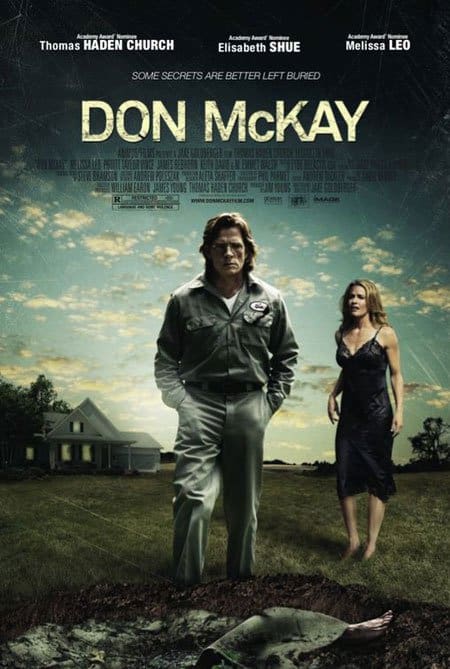 Unfortunately, what we don’t know is whether he likes/hates being a janitor or how he feels about returning to his home town and there are no clues from a poker-faced Don then or for the remainder of the film. We are given the same meager insight into the rest of the characters who never let us go beyond the surface and whose motivations remain just as ambiguous.

Equally mysterious is the brief mention of a tragedy in Don’s youth which is skipped over and, despite being of great relevance to the story, is never fully explained. From all these omissions I can only assume the writer’s idea of a mystery is to not let the audience in on the secret – whoever would have thought that that could have worked?

The reason Don returns home, we discover, is to visit his ex-girlfriend, Sonny, who is apparently terminally sick. It is soon obvious to the audience that this woman is as hale and healthy as can be and although this does present a mystery it also makes us wonder how dumb Don is not to be even an iota suspicious or to at least ask what she’s actually dying of. We also have, of course, the protective bulldog nurse who turns out to have her own agenda, but the only real mystery here is why she is covered in tattoos. There are a number of attempts to add thriller elements, like Don getting kidnapped from a taxi and, yes, you guessed it, the anonymous “get out of town or you’re dead,” phone call, but just adding bits here and there doesn’t create tension and simply makes the actors look silly (i.e. welcome to melodrama).

However, the biggest problem with this film is that every intriguing idea and character nuance, and there are a lot of them, are all kept until the end, and I mean the very, very end. At about the 80th minute and through dialogue alone, plots within plots and mysteries within mysteries suddenly abound, leaving the audience to wonder how intriguing this film would have been if only all this had been woven into the story.

We are then knocked off our feet again when we are given an insight into Don’s character that is powerful enough to have given this film all the edge it needed, but coming at the 86th minute in an 87 minute film is a little late to draw us in and the entire idea, although absolutely brilliant, is wasted. Instead of enjoying an ‘ah-ha’ moment and claiming our reward for taking the ride, we feel only frustration that we were left completely out in the cold. This belated disclosure also turns Don’s encounter with an old school friend, who could have been the perfect conduit to fracture Don’s facade, into such a whopping great plot hole I’m surprised the entire cast and crew didn’t fall right in.

Yet another important revelation is aired in the finale when a police officer asks Don why he has acted the way he has, and Don gives the simple answer; “I was lonely.” When an explanation is spelled out that blatantly it usually means the writer has a sneaking feeling he hasn’t done his job, so to make sure he uses the sledgehammer-to-crack-a-walnut technique which is neither thrilling nor mysterious and, if this is a true ‘film noir’, then I’m Miss Scarlet and I’ve just murdered Colonel Mustard in the library with a very sharp candlestick.