Delicacy is billed as a romantic comedy and, if you think someone getting killed in a car accident is funny, you’ll think this film is a hoot. If, however, your tastes are a little more discerning, you’ll find little here to entertain. It’s a story that has nothing to say, takes ages to say it, and is simply 108 minutes of unadulterated whimsy.

Nathalie (Audrey Tautou) is swept off her feet by Francois (Pio Marmai). The two soon marry but the storybook romance ends when Francoise is killed in a car accident and Nathalie becomes a very young widow. She buries herself in work until, inexplicably, she is attracted to Markus (Francois Damiens), a lumbering Swede who works in the same building. She lets her feelings be known by summoning him to her office and, with no preamble, kissing him passionately on the lips. He is dumbstruck but comes to gradually believe that this beautiful Parisian could have fallen for his alternative charm. 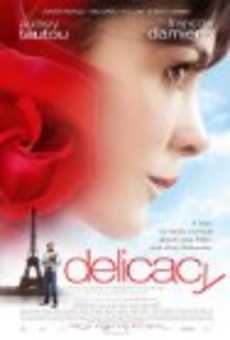 A lot of the interaction verges on the melodramatic, all of which is incredibly slow. There are many uneventful scenes with Nathalie’s concerned parents and also quite a few with people on roofs having a sulk. The funeral, in particular, seems to last forever. All the mourners line up to kiss Nathalie, and she actually embraces five of them before the director decides to cut. Obviously, post-death behavior is necessarily unhurried but, after the second hug, it feels like someone has switched on the repeat button.

A question that this film never answers is why Nathalie kisses Markus in the first place. She hasn’t shown any signs of psychosis, she isn’t taking prescription drugs and, as far as we know, doesn’t have a fetish for men who wear bad sweaters. Therefore, the only explanation must be that she’s having a fantasy of her own, and she thinks that if she kisses her balding Swede enough times, he’ll turn into a prince. All things are possible and fairy tales can, of course, come true, so good luck with this one, Nathalie.