In 2006, Black Book put a provocative new spin on the Holocaust genre by featuring Jews as resistance fighters rather than in the generally-depicted role of passive victims of genocide. Now, with Defiance, director Edward Zwick, is upping the ante further by recounting the heroic exploits of a courageous band of guerillas who not only escaped from the ghettos of Poland but subsequently staged daring raids back into Nazi-occupied territory to rescue other imperiled Jews.

Led by the Beilski brothers, Tuvia (Daniel Craig), Asael (Jamie Bell), Zus (Lieve Schreiber) and Aron (George Mackay), the group established a base camp deep in the Nalibocka Forest of Belorussia, where 1,230 refugees from Hitler wrath would endure over two years of incredible hardship until they were liberated by the Russian Army in 1944. During its existence, only about 150 of the partisans participated in combat, since 70% of them were women, children and the elderly.

Based on the best seller of the same name by Nechama Tec, Defiance is an epic tale of Biblical proportions which explores a variety of universal themes ranging from vengeance to salvation. Although we find the intrepid protagonists primarily pitted against the enemy and the elements in their desperate day-to-day struggle simply to survive, the picture also amply illustrates that they somehow never lost touch with their humanity. So, we see the Beilskis involved in relatively-mundane matters involving questions about family, love, loyalty and philosophy. 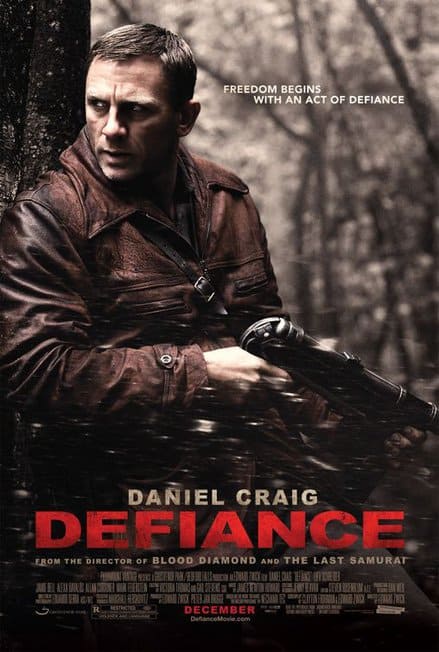 Unfortunately, despite decent acting jobs by the principal cast, the director’s decision to inject so much distracting personal drama into the production means the film suffers from an absence of the cinematic momentum necessary to generate the sort of palpable tension which made Black Book a hit. The upshot is that in Defiance we have a belated tribute to some unsung heroes which turns out to be of considerably less entertainment than historical value.