Making a movie about the magic to be found in reading books, is a little like General Motors singing the praises of riding a bike instead. So the biggest challenge for Iain Softley’s storybook fantasy Inkheart, is to not have the lavish visuals drown out the wonder of words on the page. A tall order indeed for a movie for kids, since flashy special effects wizardry up on the screen has just about nothing to do with the literary inspired inner life of a child’s imagination.

Not that the actors don’t work vigorously to bring those magical powers of book love to cinematic life, as detailed in the original insanely popular Cornelia Funke German children’s novel, which has been translated into scores of world languages since its release in 2000. But it’s a formidable ordeal, not unlike the task at hand of the characters they play, which is to free human beings imprisoned in books they’ve been reading perhaps just a little too enthusiastically.

Brendan Fraser is Mortimer Folchart in Inkheart, a devoted dad to Meggie (Eliza Hope Bennett). Mo discovers to his dismay that he possesses the dubious gift of being a ‘Slivertongue,’ with the surprise power to imprison people in books, while simultaneously freeing characters within, just by reading the stories aloud. And after figuring out that he’s lost his wife somewhere within the medieval realms of a book called Inkheart that Mo had been reading to his daughter, the distraught spouse embarks on a world journey to find the lost book, and free his wife. 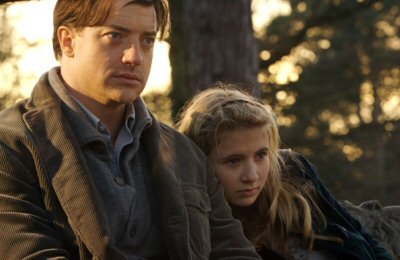 The narrative initially weaves a gracefully enchanting web rich in fantasy, as it winds its way along this mystical road trip. And with a delightful comic detour when stopping by for a spell at the home of Aunt Elinor (Helen Mirren), an eccentric bookworm who won’t stand for any foolishness when it comes to messing around with literature. Even if she has to face down along with a more pragmatically minded Mo, the treacherous Capricorn (Andy Serkis), an escaped villain from Inkheart currently gleefully terrorizing the human race.

Ignoring the wise premise that less can indeed be more, the film bombards the screen with a noisy overload of characters and subplots far too numerous to properly sort out for a viewer of any age. This, while snippets of beloved children’s folklore and fairy tales get tossed on to the screen and disappear just as quickly, is a dizzying swirl of lost and found fast forward favorite fiction.

Eventually malevolent protagonists get their just desserts for perpetrating excessive pandemonium, while happy endings are distributed to all who have earned them. But not until after plenty of chaotic battles have ensued that register a bit high on the terror meter for spectators of tender ages. Which really conveys confusing mixed messages about reading as a worthy pastime for kids, but nearly as dangerous an activity as, say, playing with matches. Not to worry, you can always go to the movies.