While the media is never lacking for images of brutal civil wars in impoverished developing countries, rarely if ever does a reporter pause to ask, where is the money to buy all this weaponry when there are barely enough personal funds for food for its hungry population, let alone not a single weapons factory on the continent? The Dutch documentary Dealing And Wheeling In Small Arms – part expose, part mystery thriller reality show – ambitiously probes these issues. But up against the secrecy shrouding this suspect alarming arms trade, the film mostly skims surfaces.

And if it appears that weapons fomenting these bloody civil wars seem to be falling from the sky, according to director Sander Francken, there is indeed truth to that bizarre impression. One of many traumatized Congo villagers who lost family to the conflicts, reports guns dropping continually from planes via parachutes, and people simply being told to go fight each other. And unlike these newly instigated warriors who seem to barely have a reason for battling each other, beyond preventing their own deaths, it’s clear that this unfocused deadly paranoia is a premeditated political destabilization, the better to economically exploit the natural resources – whether oil or gold – of whatever country in question.

Shot on location in Cambodia, Eastern Congo, Uganda, Bosnia-Herzegovina, Serbia, Germany, the United States and The Netherlands, including UN Peacekeepers’ mass confiscation of weaponry that is incomprehensibly resold to dealers, the film sets its sight on too broad an inquiry. And inevitably sacrifices in-depth analysis, while pessimistically offering no potential solutions. In effect, the United States in particular is given a free pass and Eastern Europe castigated, while ironically the United States has led the way in disseminating weaponry (this country’s largest export) around the world by far, to the tune of over 134 billion dollars in recent years.

The most compelling sections of Dealing And Wheeling In Small Arms are those that focus on the personal consequences of the ‘arming of communities,’ including loathsome emotional manipulation of these cultivated rural civil warriors, the damaged lives of kidnapped youngsters forcibly recruited as child soldiers, the decimated African families surrounded by the ghosts of murdered kin, and the warped proliferation of pathological gun love. 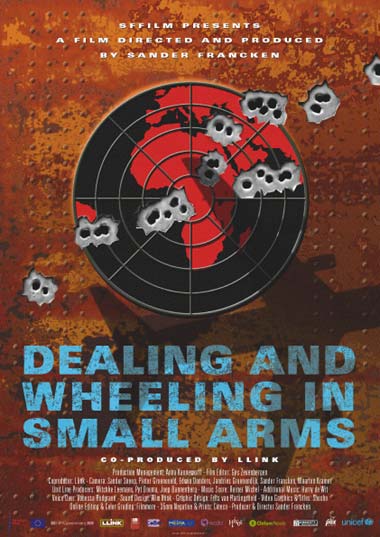 And while more concerned with effects than causes or solutions, the film nevertheless creates a logic for what may seem like merely senseless internal national conflicts. Or as someone reasons, ‘While it’s true that people with guns kill, people without guns die.’ One only has to imagine going outside in your own neighborhood, and encountering people, including children, running around the streets with rifles and randomly shooting others on a whim.

A blunt postscript to the film more than makes its point, referring to the number of victims killed per minute around the world by guns. ‘Dedicated to the 64 people who died in the time it took you to watch this documentary.’