The 21st century world we live in might seem really strange and freaky to a time-traveling Middle Ages kinda guy like Dante Alighieri, but his old school visions of damnation and hell probably haven’t changed much.

Which is why a weirdly reimagined and raucously updated animated excursion through The Inferno’s outrageously punitive and, well, funny as hell afterlife fantasy in Sean Meredith’s irreverent puppet outing of the same name, rarely feels contrived or even anachronistic.

More like an equal parts bawdy and ballsy stroll through the differently conjured Inferno that’s less like a trip back in time than plain tripping out. 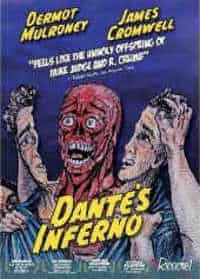 The surreal tale begins as inner city urban noir, where strung out slacker youth Dante (Dermot Mulroney) wakes at dawn in a garbage strewn alley with a serious case of disorientation. Enter foreboding, glum hairy elder, Virgil (James Cromwell), leading the baffled stoner down ever creepier circles of hell where punishments are sorta streamlined to fit the crime.

And for instance while those who in life once indulged in voracious vices like gluttony and lots of sex are condemned to repeat their compulsions eternally nonstop, people who refused to take a stand on anything during their apolitical lives, must take part in a permanent 24/7 street demonstration protesting everything.

Dante’s Inferno The Movie, subversive socio-political satire at its finest. And an equal opportunity icon smasher, whether it comes to medieval papal con men or present day perpetrator politicians of dastardly deeds in US government. Just let it be said that I entered a dark wooden puppet movie and laughed till it hurt. Now there’s a novel notion of pleasure as punishment.