CREATION claims to be a psychological thriller and heart-wrenching love story, but in fact serves only as a grim reminder that historical dramas should be left firmly in the century they are created.

This film is about Charles Darwin’s struggle to write his most famous work, On the Origin of Species, amidst the emotional turmoil of a family stricken by tragedy and driven apart by emotional denial. These components present the filmmakers with an opportunity not only to educate the layman with insights into Darwin’s philosophies but also to feed the audience’s enduring fascination with dysfunctional families. So why did it fail?

The first reason is due to the filmmaker’s obsession to tell the story in irritating flashbacks that serve no good purpose other than to prevent the audience from finding any kind of relief from Darwin’s angst ridden persona. And, believe me, watching sweat on ashen skin for an hour and a half is no picnic.

The second problem is the inclusion of some worrying mini-stories, told in flashbacks of course, about orangutans, foxes, rabbits and ungrateful, heathen children, none of which do anything but supply a few out of work actors with a day’s pay. But the biggest flaw of all is the initial lack of integration between Darwin’s work and his relationship with his wife. These first scenes stay firmly in Darwin’s scientific world, with studious looking and horizontally challenged men popping in and out ostensibly to put pressure on Darwin to finish his goddamn book.

There are some moving moments when Annie, Darwin’s treasured daughter, is struck with a terrible disease, and if this story had been told in the way it happens (excuse me for suggesting anything so ridiculous), we could share the desperate hope of the parents that their little girl would survive and experience their fear as her fragile body grows weaker and weaker, but we are denied this journey by the Director’s overwhelming desire to tell it with style.

Believe me, Mr. Amiel, when I say that’s not why we go to the movies. 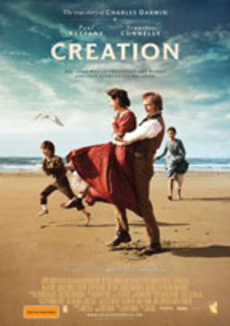