This film is shamelessly formulaic, has far too many coincidences, characters and sub-plots and also has one of the cheesiest endings in the history of cinema. It’s all very gentle and plodding and including ‘crazy’ in the title is an utter misnomer.

Cal (Steve Carroll) and Emily (Julianne Moore) were childhood sweethearts and Cal is stunned when his wife tells him she’s slept with co-worker David (Kevin Bacon). Cal immediately packs his belongings, leaving behind his son, Robbie (Jonah Bobo) and daughter (Joey King) He hangs out at a local bar where he is taken under the wing of local playboy Jacob (Ryan Gosling) who teaches him how to date in the 21st century. 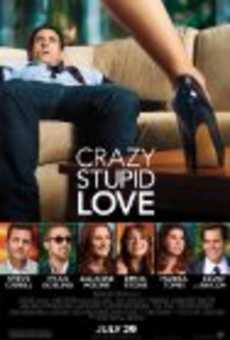 Every screenwriting book highlights the necessity of heroes having a mentor, and when Jacob, for absolutely no reason, befriends Cal, it’s like watching painting-by-numbers on a very big canvas. Under Jacob’s excellent tuition Cal experiences his first one-night stand which, after his wife’s betrayal, is entirely acceptable but the ever-weeping Emily is not only allowed to judge his behavior but also gets to punish him. As the theme of this movie purports to be an upholder of family values, this cliched story thread makes little sense.

What screenwriting books are also clear about is that a worthy opponent must be created for the hero to do battle with, but this ‘how-to’ guideline must have passed the writer by as there’s not a bad guy in sight. Cal is a nice guy; Emily is a nice woman who accidentally had sex with someone other than her husband; Robbie talks more like a 30 year-old than a 13 year-old but is also very nice; Jacob is kind to Cal; the babysitter is a sweetheart and David, the co-perpetrator of the marriage break-up, plays such an insignificant role he has no time to conflict with anyone.

This film has an exceptional number of A-list actors in the line-up. Carrell, Gosling, Moore, and Bacon are all expensive commodities who don’t get out of bed for less than a few million, so just to get them on set would have sent the budget rocketing. It’s unlikely that the producers had a few spare million to burn, so it must be that they lacked confidence in the script and decided the only way to guarantee an audience was to litter it with ‘names’. Obviously this isn’t a thought that would have been shared by the writer and perhaps these fat fees were the inspiration for the ambitious title of a film that is nothing more than a humdrum, middle-aged romance.