While the female thirtysomethings in He’s Just Not That Into You are into holding girlfriend gripe sessions about moms who got it all wrong with advice in dealing with the problematic opposite sex growing up, currently conflicted kids with much-too-busy-for-proper-parenting mothers in the movies Phoebe In Wonderland and Coraline, are slipping into unhealthy fantasy worlds in search of ideal mommies. Or at least better ones. You know, the ones who behave and do what they’re told, and excel at reading little minds, especially when it comes to regularly serving up a mountain of desserts as dinner.

Borrowing a bit from Hansel And Gretel and directed by Henry Selick (The Nightmare Before Christmas, James And The Giant Peach) from the Neil Gaiman (Beowulf, Stardust) book, Coraline lures viewers into an alternately lush and spooky 3-D enhanced animated world that simultaneously enchants and disturbs. Coraline, voiced by Dakota Fanning, is a precocious, moody young girl who resents being uprooted by her parents from Michigan to rural Oregon. While workaholic Mom and Dad (Teri Hatcher and John Hodgman) do their best to cheerfully ignore her, a peeved and sulking Coraline sets about exploring assorted nooks and crannies, and the collection of adult eccentrics occupying this sprawling, ominously sinister hilltop estate. 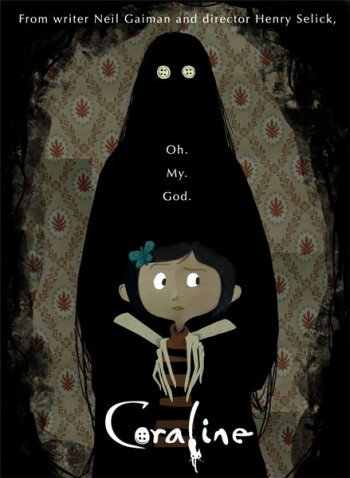 When way too curious Coraline discovers a door in a wall, she makes her way through the crawlspace to what appears to be the same home, only now her new and improved mother (Teri Hatcher again) seems to exist solely to satisfy her every whim. But this alternate universe family possesses weirdly sewn up eyes sporting buttons instead, portending a dream life slowly evolving into a nightmare, and a replacement mom with serious separation anxiety issues who will not allow her to leave.

The lavishly mystical 3-D landscapes of Coraline entrance visually, but the narrative tends to lag behind, with heedlessly repetitive deja vu visits back and forth to the petite protagonist’s imaginary family, before she finally gets it. And while much of the story is just too dark and scary for children but not sophisticated enough for adults, the giddy comic interludes by way of peculiar grownups that pop up, like the obese Venus on half shell, may be far too stocked with suggestive big boob chuckles for target audiences of tender age.

Coraline: An I see another mother undercover, grass is not always greener, cautionary not kidding bad parenting tale.