Conviction is a true story about a woman who devotes her entire life to proving her brother’s innocence. Facts kick start the tale but it’s emotions that drive it through which is character driven drama at its best. It’s a compelling journey and by the end of the film everyone will be wishing that they had a sister just like Betty Anne.

Betty Anne Waters (Hilary Swank) and her brother, Kenny (Sam Rockwell), shared a traumatic childhood and, even though they were sometimes farmed out to different foster homes, their bond remained strong and it was at this young age that Betty made a promise to her elder sibling that she would never abandon him. Years later the two are still close and Betty is devastated when Kenny is found guilty of murder and sentenced to life without parole. The evidence against him is circumstantial and his conviction is largely based on the testimony of two ex-girlfriends, one being the mother of his child. Betty devotes the next eighteen years of her life to proving that her brother is innocent of this crime. 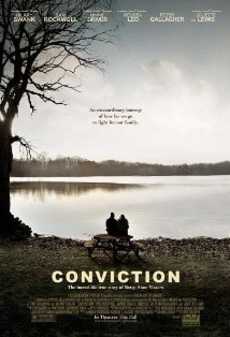 All the characters in this story are convincing, their relationships real and the chemistry between Swank and Rockwell is palpable. The film is well paced and the truth about whether or not Kenny is guilty is covertly withheld which leaves us to worry that Betty Anne could be throwing away her life for an ideal that does not even exist. The more her life falls apart, the harder she toils, the more tensions build, which is potent storytelling indeed.

Obviously it’s a difficult task to condense twenty seven years into two hours, but a few questions do remain unanswered. There are nine Waters siblings but no mention is ever made of the other seven, or even if they are in touch. Also, Betty is a steely old bird and it’s strange that she doesn’t confront the two ex-girlfriends when they testify against her brother. Both are depicted as inconsequential so Betty could have made mincemeat of them had she so chosen.

The clear messages in this film are about loyalty and devotion and unshakable belief, but something else presents itself in the telling. When Betty begins her journey, she is a single parent who dropped out of high school and there is no reason to think that things would ever change. By the end of the tale she’s a woman of stature and a shining example of humanity, both garnered from the goodness in her heart that drove her on her quest to save another. The rewards she never sought have become hers and demonstrate beyond doubt that you can’t help someone else without helping yourself too.

Betty Anne’s now 56 and lives in Massachusetts. We wish her well.