For my money, Circus (1936) is the standout in a Russian retrospective of five films each featuring Lyubov Orlova (1902-1975), The First Lady of the Soviet Screen. This series of what some might call Communist propaganda pictures is being hosted by The Film Society of Lincoln Center in Manhattan and will run from May 1st to 4th. The collection is entitled Red Diva because they were made in the U.S.S.R. where Ms. Orlova was something of a cultural icon.

Besides Circus, the offerings include Moscow Laughs (1934), The Shining Path (1940), Volga Volga (1938) and Spring (1947). I was fortunate to watch several of the films with friends who speak Russian and their explanation of each one’s cultural context certainly served to enhance my appreciation of the stories. 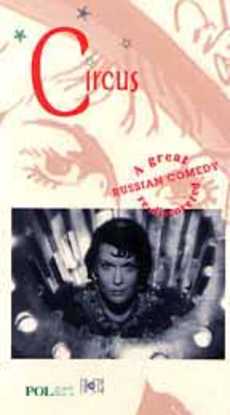 Circus opens in the United States with a harrowing chase scene in which a popular circus performer named Marion Dixon (Orlova) is literally being run out of town on a rail with a baby (Jim Patterson) in her arms by a bloodthirsty lynch mob. Why? Because she’s white, and the father of her child is black.

With chants of “nigger lover” filling the air, she barely escapes with her life by jumping on a moving train. Forced to flee from her own country alone, the disgraced single-mom ultimately finds political asylum in Moscow where she is able to resume working as The Human Bullet, a vaudeville act in which she sings, dances before the big finale during which she is shot out of a cannon into a trapeze net.

In the Soviet Union, Marion is managed by Von Kneishitz (N. Massalasky), a racist foreigner whose mind is unfortunately already infected by Hitler’s sick notions of white supremacy. But when she rebuffs his romantic advances in favor of Ivan (Sergei Stolyarov), a younger, more handsome and more open-minded local lad, the jilted German decides to ruin her career by embarrassing her in a very public fashion.

Von interrupts the circus in the middle of Marion’s performance to announce to the crowd that she “was the mistress of a Negro and gave birth to a black child,” whereupon he produces the toddler as proof. But while blacks and whites mating might have been both taboo and illegal in the U.S. and Deutschland back in the Thirties, the bigoted buffoon gets the surprise of his life when he is booed out of the arena by the entire audience which responds with catcalls like, “So what!” and “What’s the tragedy?”

Meanwhile, the women in attendance take turns singing a lullaby to Marion’s frightened baby whose tears are soon replaced by a big smile. To drive home the movie’s salient message, a proud Russian patriot proceeds to explains to the Nazi in no uncertain terms that, “In our country, we absolutely love kids. You may have a kid of any color here: a black kid, a white kid, a red kid, or even a kid striped like a zebra, or polka-dotted. Whatever’s your pleasure!”

A touching tale of tolerance that doesn’t deserve to be dismissed as propaganda but rather elevated as a refreshing and more-enlightened alternative to the racist depictions of blacks that Hollywood was cranking out at the same time.

In Russian and English with subtitles.

Circus and the four other Soviet classics will be shown at The Film Society of Lincoln Center in Manhattan between May 1st to 4th. For more information, visit: http://www.filmlinc.com/wrt/onsale/reddiva.html