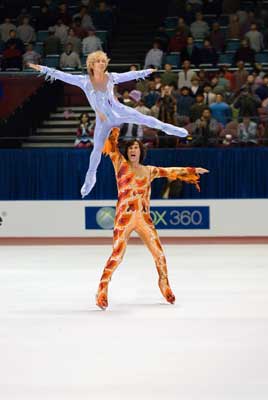 World-class figure skaters Chazz Michael Michaels (Will Ferrell) and Jimmy MacElroy (Jon Heder) are not only arch rivals but also have polar opposite personalities. Chazz is macho with a lot of bravado, while effeminate Jimmy is generally given to displays of flamboyance.

The two detest each other so much that one day they come to blows on the podium while receiving co-gold medals, an infraction which leaves them both banned from the sport seemingly for life. But due to a loophole in the rules, they learn a few years later that they can resume their careers, provided they’re willing to bury the hatchet and perform as partners in the pairs’ competition. 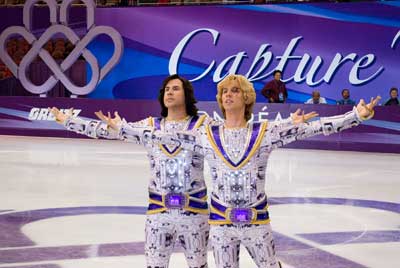 Coaxed back to the ice by Jimmy’s coach (Craig T. Nelson), they grudgingly agree to the novel arrangement and start training to take on the reigning champs, the brother-sister team of Stranz (Will Arnett) and Fairchild (Amy Poehler) Van Waldenberg. That patently preposterous premise provides the fodder for the plentitude of gay panic slapstick which sits at the center of Blades of Glory.

For, the carefully-coordinated stunts in their new routine call for fairly explicit crotch cupping, crotch smelling, crotch rubbing and crotch raising opportunities, sight gags likely to elicit cheap laughs from heterosexuals who feel uneasy about the continuous close proximity of the boys’ bodies. The movie might have been deemed homophobic were it not for the fact that flaming Jimmy turns out not to be gay, a surprising development designed to put the audience at ease when he takes a romantic interest in the Van Waldenberg’s younger sister, Katie (Jenna Fischer).

So, after enjoying a boatload of genderbending jokes, everybody gets an 11th hour dispensation since Jimmy was really straight all along. A no harm-no foul feelgood flick featuring cameo appearances by Olympic skating greats Scott Hamilton, Brian Boitano, Peggy Fleming, Dorothy Hamill, Nancy Kerrigan, and Sasha Cohen, but not Tonya Harding.