In recent years, some leading directors have seen fit to pay tribute to the Blaxploitation Era of the Seventies, for instance, Malcolm Lee with Undercover Brother and Quentin Tarantino with Jackie Brown. But where the former was clearly a parody and the latter more of an homage, it’s not so easy to tell exactly what director Scott Sanders is going for in the case of Black Dynamite, a satire or a drama to be taken at face value.

Set in 1972, the film stars Michael Jai White in the title role as a gun-toting, two-fisted superhero bent on avenging the murder of his brother by the Mafia. Quite conveniently, the mobsters responsible have been flooding the ghetto with heroin and a penis-shrinking brand of malt liquor which afflicts black men with erectile dysfunction. Consequently, Dynamite rationalizes bloody retribution as he makes the most of beaucoup opportunities to even the score as he traces a trail back to the brains of the operation leading all the way to the White House and President Nixon (James McManus). 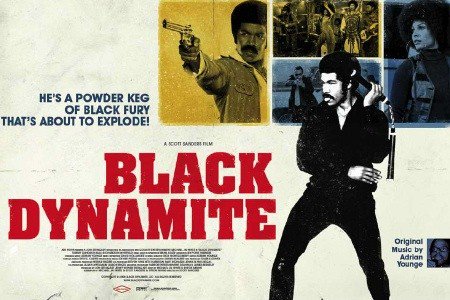 Essentially, the movie is a nostalgic throwback celebrating all of the trademarks of the blaxploit genre, from jive pimps in garish outfits with scantily-clad whores to evil politicians with corrupt cops in their pockets to a funky R&B soundtrack to foul-mouthed dialogue laced with both expletives and ethnic slurs, such as “cracker” and “coon.” Still, the flick’s salient feature is high-body count action, with Dynamite being responsible for the bulk of the butt-kicking.

Between the period costumes and the vaguely-familiar plot, the film looks like a shameless remake borrowing the best elements of The Mack, Superfly, Shaft and other readily-interchangeable classics of that best-forgotten era. That being said, if you don’t ask Black Dynamite to be anything deeper than an entertaining retro diversion, you’re apt to feel richly rewarded.

Can you dig it, you jive-ass sucker?

In English and Mandarin with subtitles.

To see a trailer for Black Dynamite, visit: