This film has no story to tell, the characters are all too passive to cause any kind of conflict and the endless flashbacks slow down a snail-pace to a near standstill. To say it lacks realism is an understatement and to say it’s a drudge is being kind.

Olivers’s (Ewan McGregor) parents had been married for 44 years when his mother died. Within weeks his father (Christopher Plummer) comes out of the closet and, at the age of 75, joins the local gay community. Three years later he is diagnosed with a terminal illness and dies at the age of 79. A few months after his father’s death Ewan meets Anna (Melanie Laurent) and their relationship begins.

If a film is going to catalogue the events of a lingering death, each moment has to be fired with emotion and the terror of the ticking clock should never be far away. Unfortunately, this story has none of these components and it plays in a matter-of-fact way that evokes only indifference from the audience. Equally uninspiring is the relationship between the father and son. The father is easy-going and the son so docile he doesn’t even comment when Pa moves his 35 year-old lover into their communal home. There’s one particular cringe-worthy scene when father and boyfriend make out and Oliver doesn’t so much as avert his eyes, which is bordering on the bizarre. 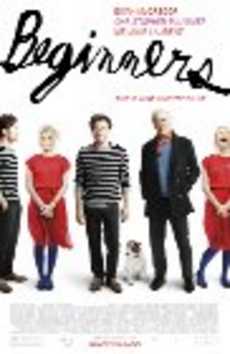 It’s not at all clear what message this film is trying to send so I’ll go out on a limb and guess it’s ‘If your father turns out to be gay make sure you look after his dog when he dies.” The dog, by the way, is given sub-titles when he has something to say and, although this is a rather silly attempt at humor, he actually has the most profound line of the entire film. I can’t remember the exact words but I think it was something like, “bow wow, bow wow, bow wow.”