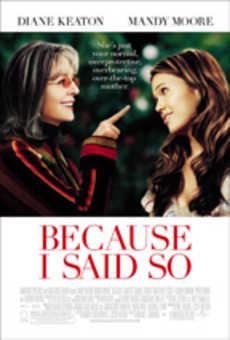 Avoid This Cliche-Ridden Rip-Off “Because I Said So”

In 2004, Diane Keaton landed an Oscar nomination for Something’s Gotta’ Give, a pleasant romantic romp where she played a post-menopausal playwright who steals the heart of the aging sugar daddy who’s been dating her daughter. She and Jack Nicholson generated oodles of screen chemistry opposite each other in that surprise hit, so it comes as no surprise that Hollywood would try to recapture some of that magic in a slight variation on the theme, even if it couldn’t attacch Jack to the project.

Because I Said So is another lighthearted comedy, but this cliche-ridden rip-off flips the script to have a younger man first show an interest in Keaton’s character before belatedly turning his attentions to her daughter. The film was directed by Michael Lehmann, one of those flypaper hacks who somehow continues to stick around Hollywood despite churning out nothing but mediocre movies, such as instantly forgettable adventures like Beaver Gets a Boner, Hudson Hawk, Airheads, My Giant and The Truth about Cats & Dogs. 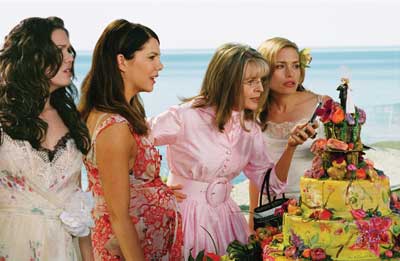 His latest offering is fairly annoying from start to finish, primarily because Keaton is still relying on that ever less-endearing assortment of addlepated antics which won her an Academy Award for Annie Hall back in 1978. Now that she’s in her sixties, that girlish flustered act is wearing a bit thin. And having her parade her around in panties and crinoline party skirts isn’t fooling anybody into thinking she’s a teenager, either.

The story is set in present-day L.A., where we find Daphne (Keaton) intent on marrying-off her baby, Milly (Mandy Moore), because she doesn’t want the unlucky-in-love gourmet caterer to end up a lonely spinster. Both of her other two daughters Maggie (Lauren Graham), and Mae (Piper Perabo) have already tied the knot but, for some reason, her youngest just doesn’t how to find a man inclined to commit. 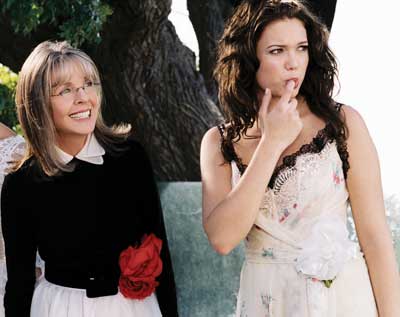 So, her helicopter mom does what any sensible, sitcom parent would do, secretly place an ad in online dating service under the heading, “Mother Seeking Life-Partner for Daughter.” Then, after culling through countless losers, she conducts a series of speed interviews with 17 candidates at a nearby restaurant.

In the midst of that zany madness, Johnny (Gabriel Macht), a guitarist performing with the house band, saunters over to flirt with the sexy senior citizen between sets. What daft Daphne doesn’t realize as she gives him short shrift is that while he might be too young for her, he’d make the perfect Vanilli for Milly. 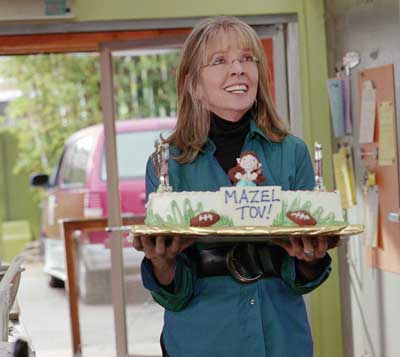 Instead, she taps one of her Internet finds, Jason (Tom Everett Scott), a well-mannered, well-connected architect, to be her daughter’s Mr. Right.

This means that the audience has to suffer through a transparent plot which has Milly mismatched with Jason before she finally figures out that the pretentious rich creep was handpicked by her mother. This familiar formula could have worked were it not for Ms. Keaton’s infuriating dumbing herself down and mugging for the camera in a desperate attempt to prove she’s terminally-cute in a pre-feminism sort of way.

An insipid insult to the intelligence.